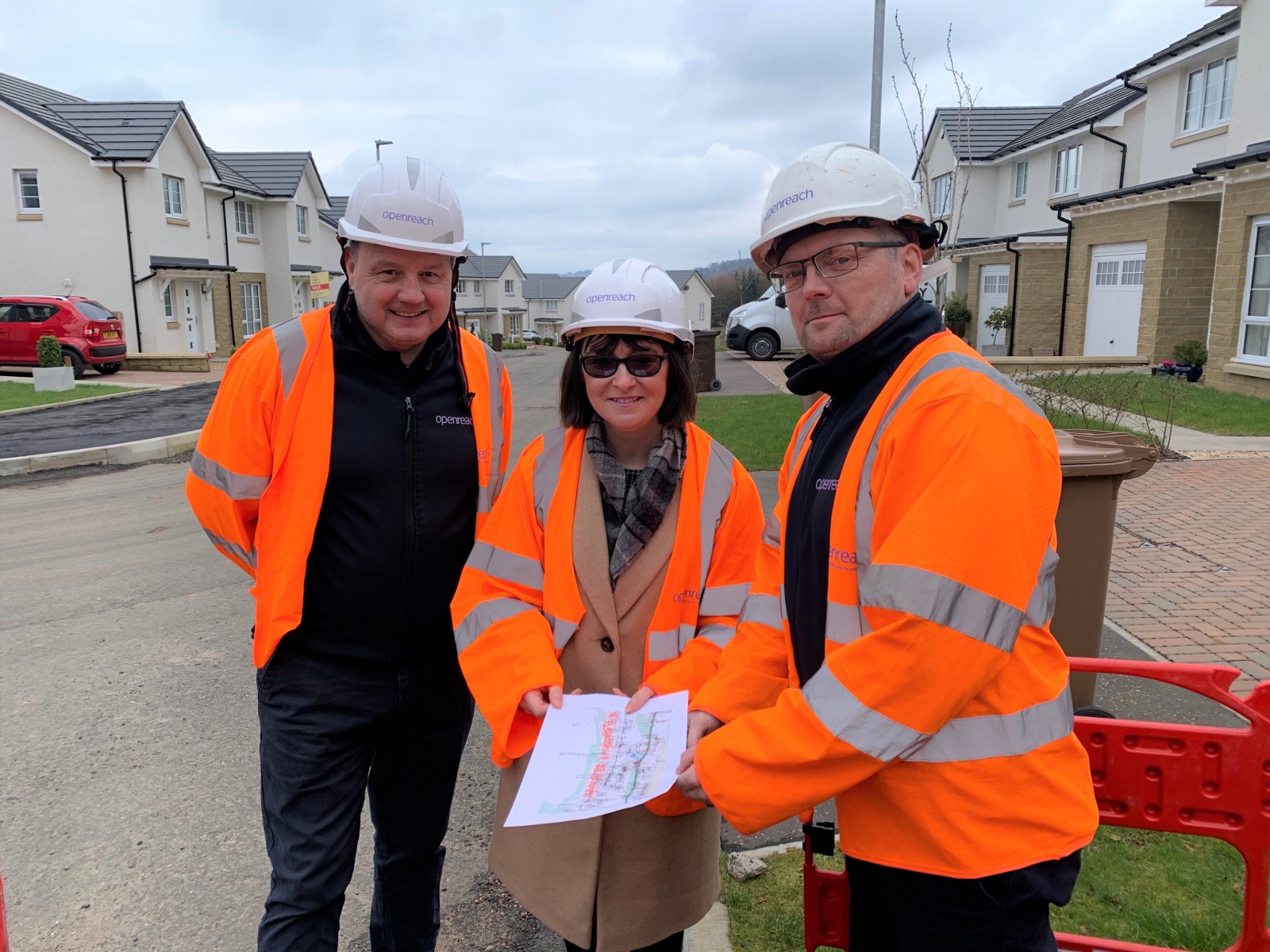 North Ayrshire and Arran MP Patricia Gibson has visited Openreach engineers as they install an ultrafast broadband network for new housing in the coastal village of Fairlie.

The MP and MSP visited a development at Regatta View to witness first-hand the innovative engineering techniques being used to deliver the next generation of full fibre broadband technology directly to homes.

According to independent website Think Broadband, more than 95 per cent of North Ayrshire and Arran residents already have access to superfast fibre coverage at speeds of 30Mbps and more. Local homes and businesses can check what services are available on the Openreach fibre checker.

Patricia Gibson MP said: “As digital services become increasingly integral to the day-to-day functioning of businesses, local services and communities, it is vital to make sure progress is being made to support the continued development of infrastructure.

“Full fibre will future-proof Scotland’s economy in our increasingly interconnected world. That’s why it is so important for FTTP to be standard on new developments, and I am pleased that these Fairlie residents will now have access to the best possible broadband to support them into the future.

“We all know that good connectivity is key to supporting our thriving communities and local economies into the future and, while there is still more to be done, making sure that new houses are built with the latest technology is a big step in the right direction.”

New research from Cebr predicts that full fibre for everyone in Scotland by 2025 would generate an economic impact of £4.55 billion and boost the workforce by 37,400.

Openreach plans to bring full fibre broadband to four million premises by the end of March 2021. As well as its commercial investment in upgrades, Openreach has been working closely with the Scottish and UK Governments, local authorities and other partners since 2013 to bring fibre-based broadband to communities which were not included in any upgrade plans by private companies.

The visit was hosted by Vicky Macadam, head of public affairs for Openreach in Scotland, who said: “We welcomed the opportunity to give Patricia Gibson MP a step-by-step demonstration of our technology. Our engineers work hard every day to keep communities across North Ayrshire and Arran connected and it was great to be able to share the challenges and realities of delivering this new technology.

“We understand the importance of effective, reliable broadband services and, while there is still more work to be getting on with, we’ve made good progress in delivering a high level of coverage to local businesses and households alike.”

Openreach’s fibre-based network in Scotland currently passes more than 2.6 million homes and business premises, predominantly with Fibre-to-the-Cabinet (FTTC) technology at speeds of up to 80Mbps*.