Rural broadband was top of the agenda as MP Therese Coffey spent time with landowners at the Benacre Estate in Suffolk. 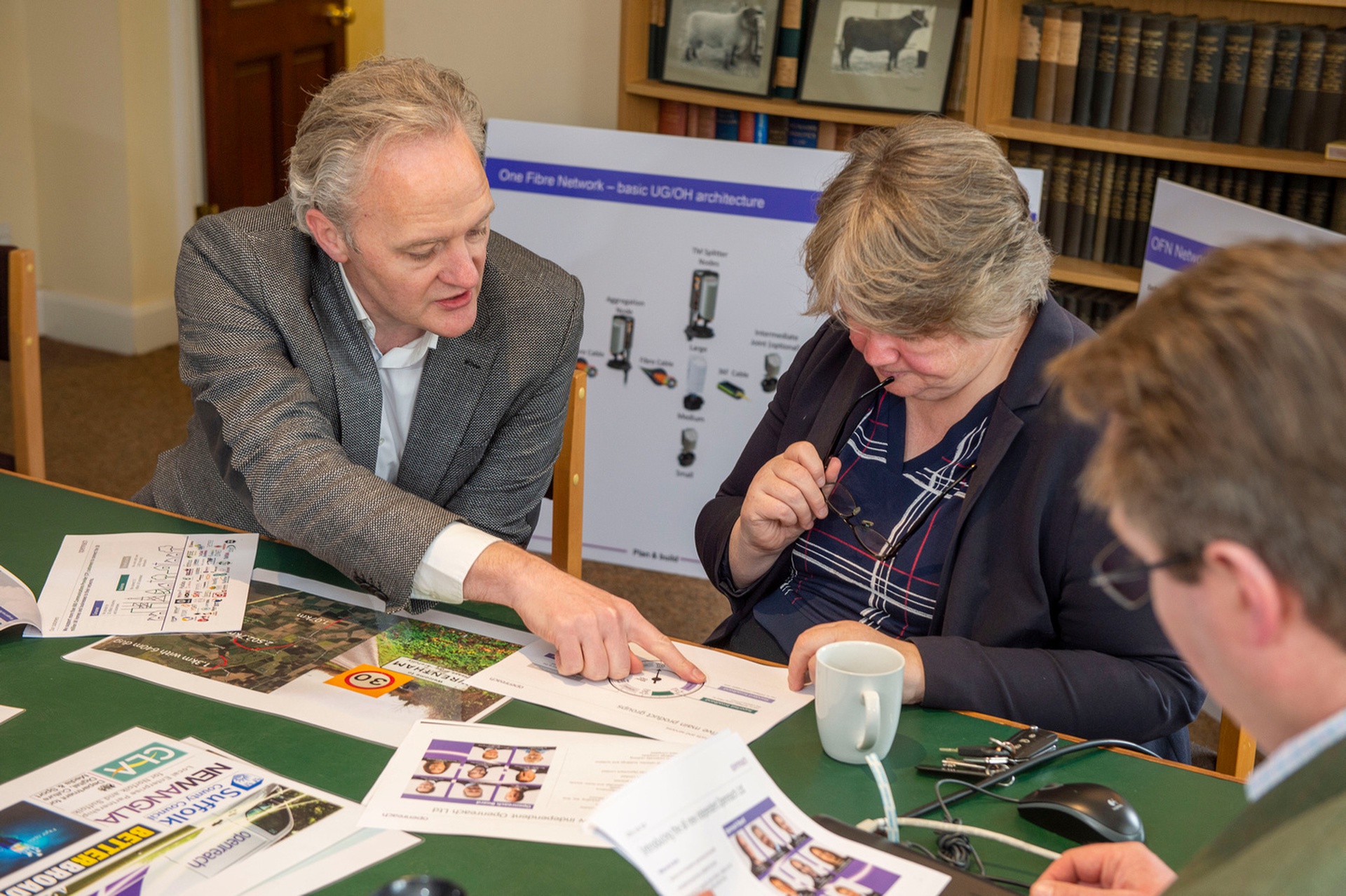 Rural broadband was top of the agenda as MP Therese Coffey spent time with landowners at the Benacre Estate in Suffolk.

The local MP, who’s also the Environment Minister, was given a tour of the country estate, situated on the Suffolk coast between Lowestoft and Southwold, by landowner Edward Vere Nicoll.

He’s been working closely with both the Better Broadband for Suffolk partnership and Openreach to make some of the fastest broadband speeds in the UK available there.

Last year, the team at Benacre soon realised they could substantially reduce the overall cost of installing fibre broadband, and speed up the process, by choosing to self-dig their own network trenches.

They worked closely with the Better Broadband for Suffolk partnership, which is a partnership between Suffolk County Council, Openreach, Department for Culture, Media and Sport (DCMS), the New Anglia Local Enterprise Partnership (NALEP) and local councils, to provide access to some of the fastest broadband speeds in the UK. With download speeds of around 330 Mbps, the new technology is not only quick, but it’s also future-proof and more reliable.

Edward Vere Nicoll is delighted with the outcome:

“We found that we were struggling to rent out some of our properties, because the first question that most people asked was about the broadband speed. At that time, we didn’t have fibre and it was proving to be a major obstacle. I got in touch with Openreach to find out more and we quickly identified three self-dig opportunities at Benacre, around 5km in total, which would make a huge difference.

“We worked really closely with local farmers to get the new infrastructure in place, including pulling armoured cable through underground ducting. You do have to be careful on farmland, but with these modern machines capable of creating a trench just a couple of feet wide, we’re able to go down to a sufficient depth around the edge of fields to make sure it’s out of harms way and not accidentally damaged in the future.

“It’s fantastic that we’ve been able to bring some of the fastest broadband speeds available to this remote part of Suffolk. We used to get low single figure download speeds, but now we’re comfortably over 300 Mbps. Faster broadband is critical to the long-term prosperity of rural communities, with an ever-increasing reliance of broadband for home and work use. Self-dig is a great option for those in a position to do so.”

Across Suffolk, more than 95 per cent of homes and businesses can access faster broadband, largely thanks to Openreach’s commercial rollout, and the county council’s Better Broadband for Suffolk partnership.

“Connectivity is vital for communities in my constituency and I know it can be a challenge rolling out new infrastructure in rural locations.

“I was delighted to see Openreach and the Benacre Estate working hand-in-hand using innovative techniques such as self-dig and drones in order to deploy full fibre broadband to homes and businesses. I hope other farmers and landowners will replicate what I saw, in order to make Suffolk one of the most digitally advanced parts of the country.

“Our lives increasingly dependent on faster, reliable broadband connection for things such as accessing education and health services, enabling business to trade efficiently, making full use of smart technology around the home, as well as online TV and gaming. So, it is exciting to see Benacre and Openreach leading the way.”

Suffolk web users can check either the Better Broadband for Suffolk (betterbroadbandsuffolk.com) or Openreach (openreach.co.uk) website to find out if they’re able to access the latest fibre broadband technologies and see what’s happening locally. 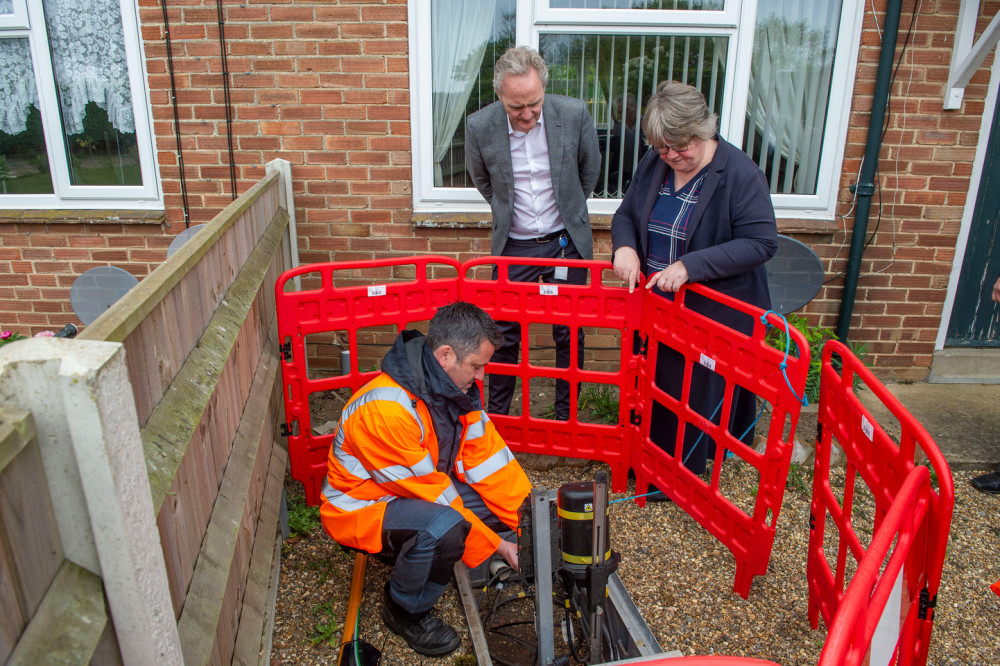 Thousands of people across the county have already chosen to upgrade, but it’s thought many people might not be aware that faster speeds are available, they may believe it to be more expensive or think that their broadband speeds will increase automatically – which isn’t the case.

“Self-dig schemes, such as this, can help our programme to cover the properties that are in the hardest to reach areas of Suffolk. The reduced cost of providing fibre broadband through a self-dig scheme, which comes from the civil engineering work being undertaken by the landowner, or a contractor on the landowner’s behalf, means that our funding can stretch to reach even more properties. This is important as we continue to pursue a means of connecting the whole of Suffolk to superfast broadband.

These schemes highlight how important collaborative working can be. This is an exemplary demonstration of what can be achieved when Suffolk County Council, our partners such as Openreach, and the community work together.”

“We have already done a huge amount of work across Suffolk but we know there is more to do. We’re working closely with the county council to extend our fibre network into some of the most hard-to-reach areas. And Openreach is making huge progress across the UK to make the latest Fibre to the Premise (FTTP) technology available. We aim to reach more than four million premises by March 2021.”

Openreach’s commitment to Suffolk and the wider East of England region extends well beyond making faster broadband available. Around 3,300 of our people live here, and earlier this year the company announced it was recruiting 400 new engineering jobs.

A large Openreach training centre is located in Peterborough, where thousands of engineers get to grips with the technology behind the UK’s largest telephone and broadband network, connecting everything from homes and schools to businesses and government departments.