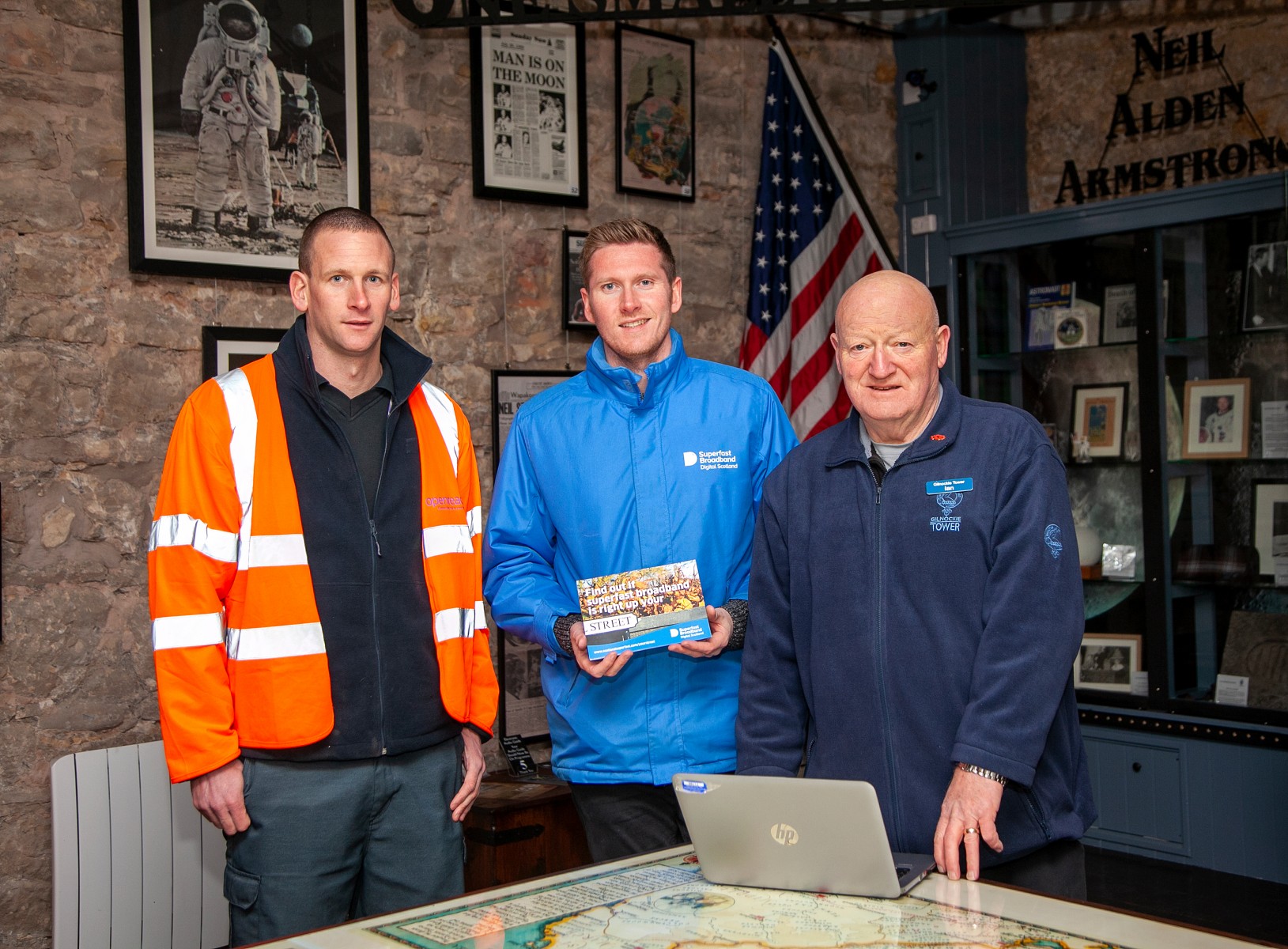 It was one small step for man, one giant leap for Digital Scotland Superfast Broadband when ultrafast, full fibre broadband arrived at remote Gilnockie Tower.

The historic home of the Armstrong Clan, and counting astronaut Neil among its most famous visitors, Gilnockie Tower near Canonbie in Dumfries and Galloway is a 16th century tower originally built as a stronghold for a notorious reiving family.

In the latest chapter in its illustrious history, the restored tower has become one of the first premises in the area to upgrade and benefit from Fibre-to-the-Premises (FTTP) technology, thanks to the programme.

All of the latest local properties reached by the rollout – in places like Southwick, Kirkcolm, Moniaive, Wigtown, Dalry and Corsock as well as Canonbie– can now connect to the most reliable and fastest residential broadband available[1] as Openreach engineers build more FTTP (also known as full fibre) to help harder-to-reach places join the digital revolution.

Ian Martin said: “Repairing the tower has been a long process – the fact that we are now able to have FTTP is truly out of this world.

“Astronaut and clan member of Neil Alden Armstrong visited the tower in the ‘70s when space travel was the very latest in technology – now we have the latest technology at Neil’s tower.

“In the New Year we plan to market the tower as a luxury wedding venue and having superfast WiFi is another amenity which we can offer.”

The technology, which takes fibre directly to the premises. is capable of delivering the fastest residential broadband speeds in the UK – up to 1Gbps* – about 18 times faster than the current UK average. The DSSB team has been out and about across Dumfries and Galloway over the last few weeks encouraging people to check if faster broadband is ‘Up-your-Street’ by visiting the Digital Scotland Superfast Broadband website. Local people need to sign up for the new services with an internet service provider, as upgrades are not automatic. Across Dumfries and Galloway, more than xx,000 premises are now able to connect to fibre broadband through the programme.

Engineer Alan Haig said: “Technology shapes our lives in so many ways and good broadband is really vital to that. Gilnockie Tower is an amazing place – a historic site which is now bang up to date in the 21st century with some of the best connectivity in the country. It was brilliant to be involved in bringing full fibre broadband to such an unusual, remote location and to see the difference it will make to visitors.

“Like the moon landings, the Digital Scotland project has broken new ground – laying enough new fibre cable to stretch all the way from Gilnockie Tower to NASA HQ in Washington DC three times over.”

Delivered through two projects – led by Highlands and Islands Enterprise in its area and the Scottish Government in the rest of Scotland – Digital Scotland funding partners include the UK Government, BT Group, local authorities and the EU via the European Regional Development Fund. Whether you own a business, work from home or want to keep in touch with friends and family, fibre broadband enables multiple users to connect to the internet at high speeds.

Most of the Digital Scotland deployment uses Fibre-to-the-Cabinet (FTTC) technology, at speeds of up to 80Mbps[1] but engineers have been building small deployments of full fibre technology where it’s the best answer for harder-to-reach communities and clusters.

[1] Wholesale services are available over the Openreach network to all service providers; speeds offered by service providers may vary. FTTC (fibre-to-the-cabinet) is available at speeds of up to 80Mbps. FTTP (fibre-to-the-premises) is capable of delivering the fastest residential broadband speeds in the UK – up to 1Gbps – fast enough to download a two-hour HD movie in 25 seconds or a 45-minute HD TV programme in just five seconds.

Our mission is to build the best possible network, with the highest quality service, making sure that everyone in the UK can be connected. We work on behalf of more than 620 communications providers like SKY, TalkTalk, Vodafone, BT and Zen, and our fibre broadband network is the biggest in the UK, passing more than 27.5m UK premises

Over the last decade we’ve invested more than £13 billion into our network and, at more than 173 million kilometres – it’s now long enough to wrap around the world 4,314 times.

Today we’re building an even faster, more reliable and future-proof broadband network which will be the UK’s digital platform for decades to come. We’re on track to reach four million premises with this ‘full fibre’ technology by March 2021 and ultimately, we want to upgrade the majority of the UK if the conditions are right. We’re also hiring around 3,000 trainee engineers this year to help us build that network and deliver better service across the country.

Openreach is a highly regulated, wholly owned, and independently governed division of the BT Group. More than 90 per cent of our revenues come from services that are regulated by Ofcom and any company can access our products under equivalent prices, terms and conditions.