The City of Glasgow Council leader, Councillor Susan Aitken, has welcomed news that thousands of people living in parts of Glasgow are among the first in the UK to benefit from a new ultrafast broadband network being built by Openreach, Scotland’s leading digital network business. 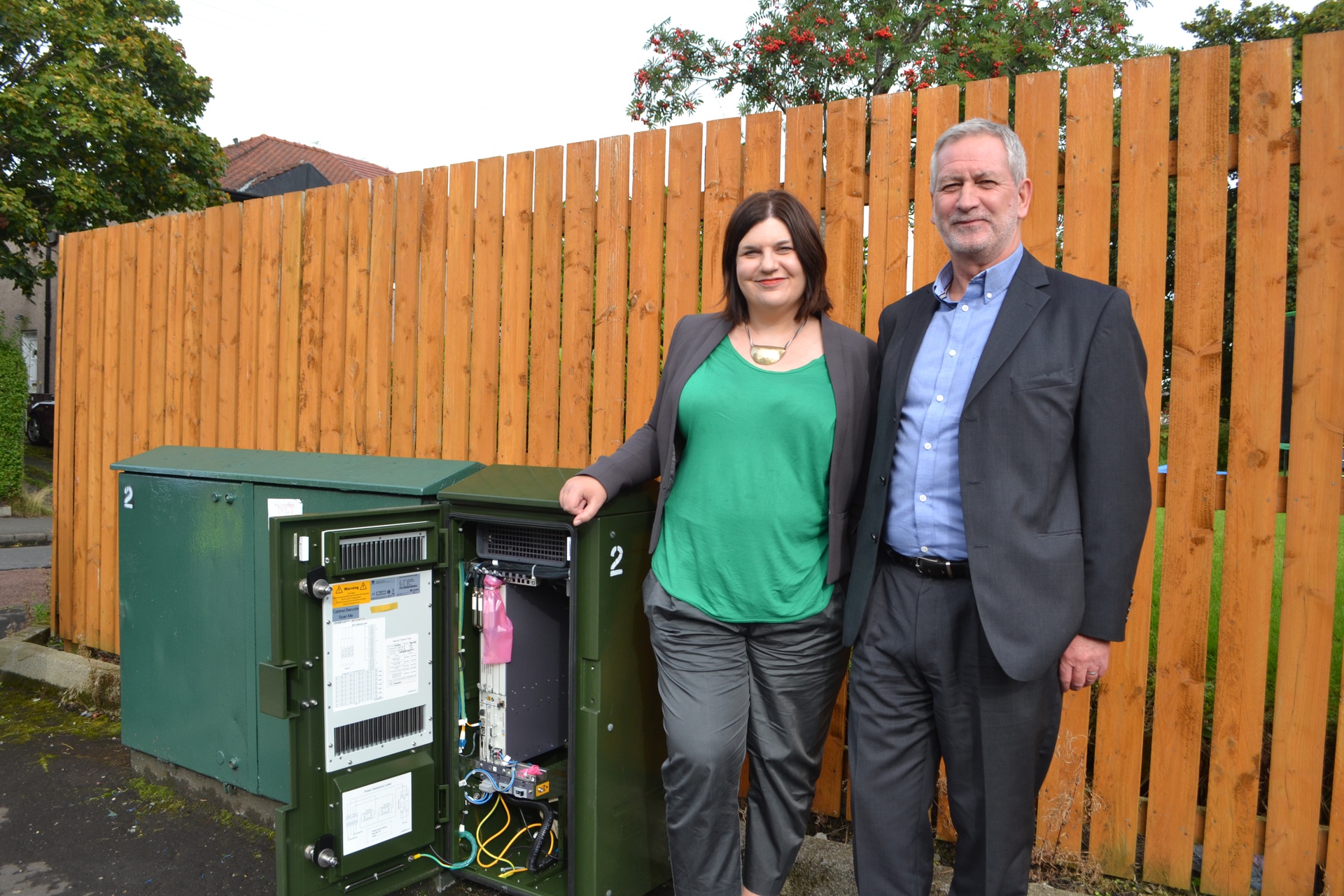 The City of Glasgow Council leader, Councillor Susan Aitken, has welcomed news that thousands of people living in parts of Glasgow are among the first in the UK to benefit from a new ultrafast broadband network being built by Openreach, Scotland’s leading digital network business.

The new ultrafast services have already started to go live in more than 9,000 thousand homes and businesses in parts of Langside, Linn and Rutherglen and, as part of a visit to Langside telephone exchange, Ms Aitken met with a number of engineers who are building the new broadband infrastructure in the city.

Parts of the city centre and Bridgeton in the east end will also benefit later in the year as part of a UK pilot of cutting edge GFast technology. Openreach plans a national rollout of ultrafast broadband to 12 million homes and businesses by 2020.

Download speeds of up to 330 megabits per second (Mbps) – about ten times the UK average[1] – will be available to thousands of homes and businesses in the pilot areas. People using it will be able to download a two hour HD film in just 90 seconds, a 45 minute HD TV show in just 16 seconds, and a nine hour audio book in just three seconds.

Ms Aitken said: “High-speed broadband has an essential role to play in everyone’s lives – whether at home or in business. It’s great news that thousands of local people in Glasgow are among the first in the UK to be able to upgrade to a new technology which offers ultrafast speeds.

“As demand for faster broadband speeds increases, I was pleased to be able to see how the latest technology will meet people’s needs. The arrival of ultrafast broadband means local people and firms can do more online, more quickly and on multiple devices and there’s lots of evidence to show it boosts the local economy. I want Glasgow to be the leading digital city in Scotland and this investment from Openreach will support that.

“I know many of my constituents in Langside will welcome the benefits the faster speeds will bring, especially to businesses and home workers. I look forward to seeing more ultrafast broadband being rolled out by Openreach across the rest of the city.”

David Nixon, Openreach senior fibre delivery manager in Scotland, said: “My team are excited to be part of this work in Glasgow to pilot the latest technology. We already have the first Glaswegians benefiting from our ultrafast speeds with GFast, and our engineers are continuing to install more of this new technology across the city.

“Developing the technology of the future is a key part of Openreach’s work. Around nine out of ten homes and businesses already have access to superfast speeds in Glasgow over the Openreach network, with a choice of around 580 Service Providers. Faster speeds are more important than ever, and we’re sure our new ultrafast network will play an important part in the future success of Glasgow.”

The new technology allows ultrafast speeds, which previously required fibre optic cables to be run all the way to a property (FTTP), to be transmitted over existing copper lines and fibre broadband cabinets. This is significant as GFast will enable Openreach to make ultrafast fibre available more quickly to a much larger number of homes and businesses than if it focused on FTTP alone.

It adds to the significant work already completed in Scotland, where Openreach has made fibre broadband, with speeds up to 80Mbps, available to around 2.2 million premises through a combination of the company’s investment and the Digital Scotland partnership with the public sector.

You can find out more about GFast at openreach.co.uk/ultrafast.

GFast is a cutting edge technology which allows us to deliver Ultrafast speeds over existing copper lines. It builds on our existing network, so it allows us to upgrade areas very quickly with minimal disruption and cost, and will evolve over time to offer even faster speeds.