Openreach sets out its plans at Holyrood drop-in session 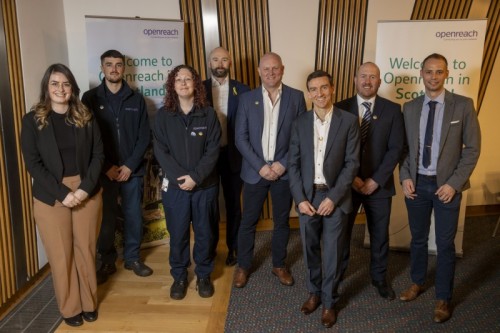 MSPs from around Scotland met engineers and apprentices from Openreach to discuss the roll out of full-fibre broadband and the economic benefits fast, reliable connectivity is bringing to Scotland’s economy during a drop-in session at the Scottish Parliament.

Around 20 MSPs, plus office staff and researchers, were updated on work being done to upgrade the country’s broadband network. They also met Openreach apprentices Hayley Goldthorpe and Jack Cotton to hear first-hand about their experiences.

Openreach recently announced it will create and fill around 500 more Scottish jobs during 2022 – including around 390 apprenticeships – as it continues to invest billions of pounds into its UK broadband network, people and training.

According to thinkbroadband, the UK's largest independent broadband news and information site, nearly 95 per cent of Scots can currently access superfast broadband at 30Mbps+.

At the beginning of the year Openreach announced that more than half a million Scottish homes and businesses can now connect to its gigabit-capable, full fibre network. Around 350 Scottish cities, towns and villages are included in its rollout to 25m UK premises by the end of 2026.

The drop-in session was hosted by Fraser Rowberry, Openreach's Chief Engineer for Scotland, who thanked Emma Harper MSP for sponsoring the event.

Fraser Rowberry said: “We know that reliable, ultrafast internet connections can have a transformative effect on businesses, online learning and people’s daily lives. That’s why we at Openreach are committed to rolling them out to homes and business premises across Scotland.

“Research from Cebr last year evidenced the hugely positive economic impact universal connections could have in Scotland. A comprehensive full fibre network could enable 76,000 people to re-enter the workforce and contribute billions of pounds to the Scottish economy.

“We were delighted to be able to take that positive story to MSPs today and set out our vision and plans for bringing ultrafast broadband to more of Scotland.”