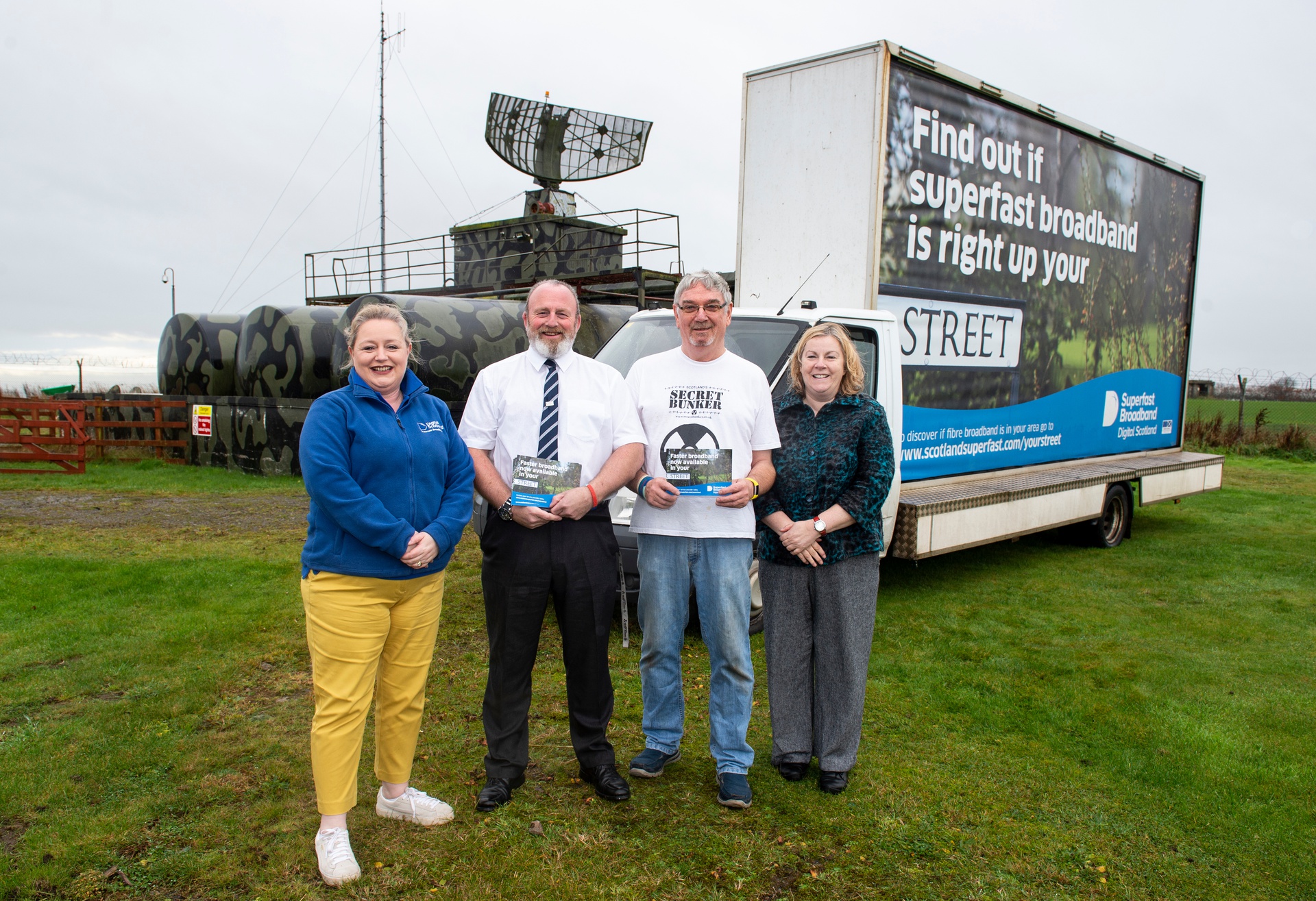 To celebrate, the Digital Scotland team visited Scotland’s Secret Bunker near St Andrews, who thanks to the programme, are now using the very latest in ultrafast technology.

The tourist attraction – built to withstand a nuclear attack and for 40 years a secret hidden beneath an innocent Scottish farmhouse – is among the first premises in the area to upgrade to Fibre-to-the-Premises (FTTP) technology.

The Digital Scotland team was joined by Morag Miller (Strategic Growth & City Deals Programme Manager for Fife Council) along with Marc McConnell and Lindsay Meldrum from Scotland’s Secret Bunker. Together they caught a glimpse into how the future-proof, ultrafast technology is being used by the bunker to speed up and develop its online operations and attract more visitors.

All of the latest local properties reached by the rollout – in the Crail, St Monans, Ladybank and Strathkinness exchange areas – can now connect to the most reliable and fastest residential broadband available as Openreach engineers build more FTTP to help harder-to-reach homes join the digital revolution.

The technology is capable of delivering the fastest residential broadband speeds in the UK – up to 1Gbps* – about 23 times faster than the current UK average of 46Mbps.

The DSSB team is out and about in Fife this week encouraging people to check if fibre broadband is ‘Up-your-Street’ by visiting the Digital Scotland Superfast Broadband website. Local people need to sign up for the new, faster services with an internet service provider, as upgrades are not automatic.

Across Fife, more than 59,470 premises are now able to connect to fibre broadband through the programme.

Delivered through two projects – led by Highlands and Islands Enterprise in its area and the Scottish Government in the rest of Scotland – funding partners include the UK Government through Broadband Delivery UK (BDUK), BT Group, local authorities and the EU via the European Regional Development Fund.

Whether you own a business, work from home or want to keep in touch with friends and family, fibre broadband enables multiple users to connect to the internet at high speeds. Most of the Digital Scotland deployment uses Fibre-to-the-Cabinet (FTTC) technology, at speeds of up to 80Mbps*.

Crucially, thanks to additional investment as a result of innovation and new funding generated by stronger than expected take-up, the programme will deliver new DSSB deployment in every local authority area during 2018 and into 2019, complementing ongoing commercial build across Scotland.

Kirsty Weir, PR/Marketing Manager at Scotland’s Secret Bunker, said: “It was a pleasure to join the Digital Scotland team to celebrate the availability of fibre broadband in Fife. It's good to see this project reaching more communities and giving an increasing number of homes and businesses the chance to connect to high-speed broadband.

Sara Budge, Programme Director for Digital Scotland Superfast Broadband, said: “It’s fantastic news that the programme has been able to benefit residents and businesses in and around St Andrews.

“I would like to thank Marc McConnell and Lindsay Meldrum from Scotland’s Secret Bunker for joining us to celebrate fibre broadband availability in the area – it’s clear that the bunker is still at the forefront of cutting-edge communications technology.”

Robert Thorburn, Partnership Director for Openreach in Scotland, said: “The Digital Scotland project and our hard-working engineers have delivered more coverage across the country at faster speeds than expected.

“We’re increasingly using FTTP in areas where it’s the best technical solution, and it’s wonderful to see such a prominent visitor attraction making use of the technology now available.

“We’re proud to be a partner in helping the Kingdom’s communities to reach their digital potential. We know there’s more to be done, and we’re committed to doing all we can with partners to bring better broadband to everyone.”

Notes to editors:
Due to the current network topography and the economics of deployment, it is likely that not all premises within selected areas will be able to access fibre-based broadband at the same point in the roll-out.

About BDUK
Superfast Britain is a UK Government programme of investment in broadband and communication infrastructure across the UK. Run by the Department of Culture, Media and Sport, this investment helps businesses to grow, creates jobs and will make Britain more competitive in the global race. The portfolio is comprised of three elements:
£780m to extend superfast broadband to 95% of the UK by 2017
£150m to provide high speed broadband to businesses in 22 cities
£150m to improve quality and coverage of mobile phone and basic data network services
Administered on behalf of Government by Broadband Delivery UK (BDUK), Superfast Britain is transforming Britain by promoting growth, enabling skills and learning, and improving quality of life.
For further information: https://www.gov.uk/broadband-delivery-uk