Summary
Openreach, Britain’s national broadband infrastructure provider, today announced an acceleration of its Fibre to the Premises (FTTP) build programme to enhance Britain’s digital infrastructure and to reinforce the UK’s position as the leading digital economy in the G20. 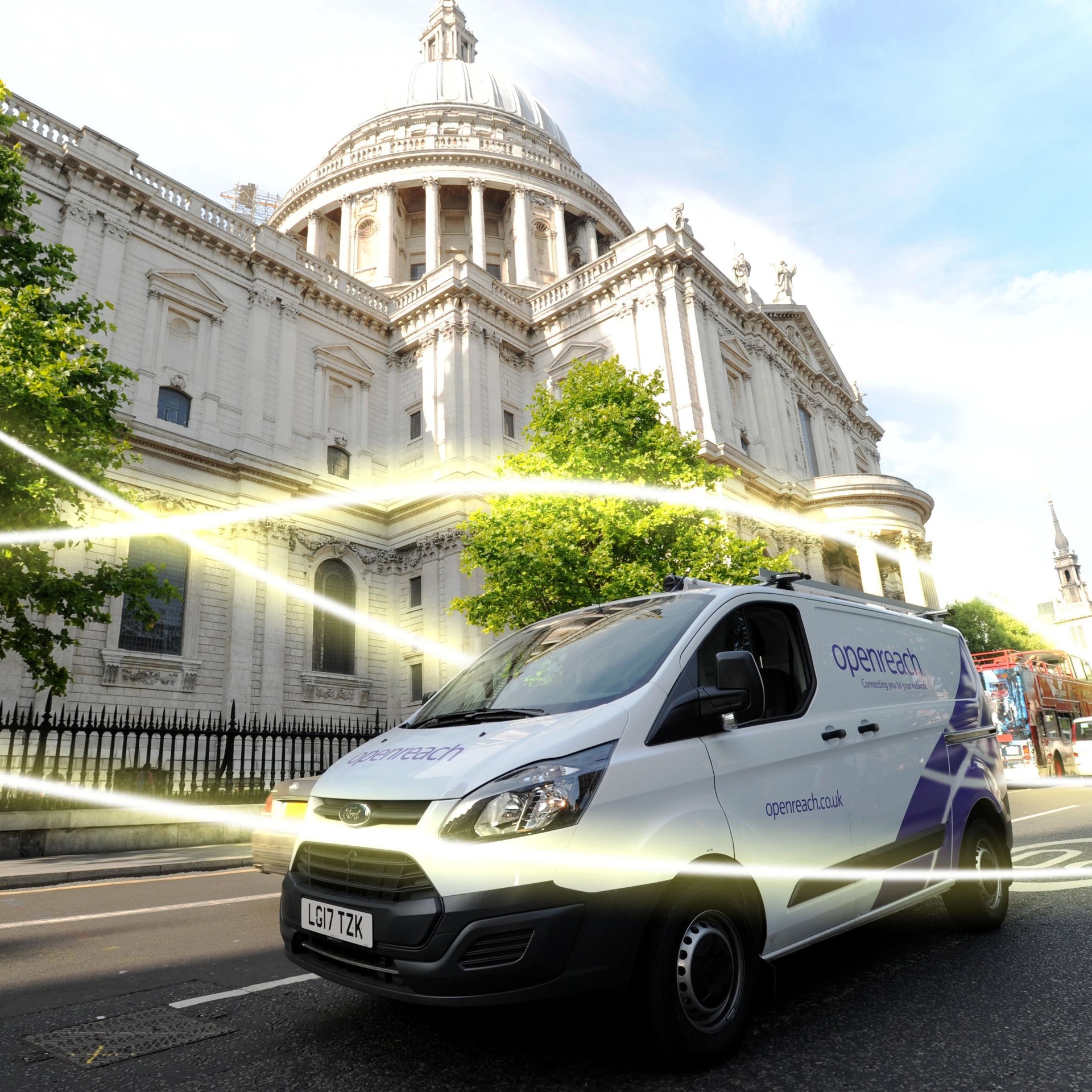 Openreach, Britain’s national broadband infrastructure provider, today announced an acceleration of its Fibre to the Premises (FTTP) build programme to enhance Britain’s digital infrastructure and to reinforce the UK’s position as the leading digital economy in the G20. 1

Openreach is extending its current Fibre to the Premises (FTTP) build target by 50% to reach three million premises by the end of 2020 through its new ‘Fibre First’ programme2. Birmingham, Bristol, Cardiff, Edinburgh, Leeds, Liverpool, London and Manchester make up the first phase of the programme which will connect up to 40 UK towns, cities and boroughs with FTTP3 with build starting in 2018. Openreach will also continue to focus on delivering FTTP to rural areas, in partnership with the Government, to make sure some of the hardest to reach communities in the UK get access to future-proofed, FTTP networks.

Fibre First reconfirms Openreach’s ambition to build a large-scale FTTP network in the UK and accelerates the next fundamental upgrade of critical UK infrastructure. With the largest FTTP footprint in the UK4, Openreach is best placed to deliver the infrastructure required, at scale, to maintain the UK’s position as a leading digital economy. An FTTP network has substantial and far-reaching benefits for UK citizens, businesses, society and the economy.The benefits include: better, more reliable service; fewer faults; and faster, more predictable and consistent speeds.The platform would be future-proof, supporting the speed requirements of customers for decades to come.

The pace and extent of this large-scale investment will depend on the speed with which the conditions to enable an acceptable return on the investment are secured. Support is needed from Communication Providers (CPs), central and local Government and the regulator to deliver key enablers, including: achieving low build and connection costs; achieving rapid take-up of and generating incremental revenue from the platform; and having a supportive regulatory and public policy framework. As with any infrastructure investment, if Openreach is unable to secure an acceptable return, it will need to review its ongoing capital commitments to the programme.

Reaching three million premises by 2020 sets Openreach on the right trajectory to achieve its ambition of building a ten million FTTP footprint by the mid-2020s and, if the conditions are right, to go significantly beyond, bringing the benefits of FTTP to the majority of homes and businesses across the UK.

Clive Selley, Chief Executive of Openreach, said: “Through the Fibre First programme, Openreach is getting on with the job of building an Ultrafast Britain. We are accelerating our plans to build FTTP to three million premises by 2020 which sets the course to reach ten million by the mid-2020s with the right conditions. Where possible going forward, we will ‘fibre first’.

“Working closely with Central and Local government and our Communication Provider customers, we will identify the cities, towns and rural areas where we can build a future-proofed, FTTP network that’s capable of delivering gigabit speeds to all homes and businesses at an affordable cost.

“We’ll continue to invest in our people and we’re already in the process of re-training and upskillingto make Fibre First a reality. We plan to hire around 3,000 engineers in 2018/19 to kick-start Fibre First and further improve the reliability and performance of our existing networks.”

An initial consultation by Openreach, which was open to all CPs and concluded in autumn 2017, found there was broad support for Openreach to start building a large-scale FTTP network in the UK. The consultation also helped Openreach to identify a set of enablers needed to underpin a viable commercial business case.The enablers remain important for the first wave of FTTP investment to be successful, and critical for Openreach to sustain a high rate of build into the mid-2020s and reach its ambition of ten million premises.

The consultation identified three sources of value: lower Openreach operating costs enabled by the new platform; incremental revenue per line from Openreach’s wholesale charges to CPs; and the benefit to Openreach from a more competitive network.Our further analysis continues to indicate that all three sources of value will be needed to secure acceptable returns.

To maximise the potential of a large-scale new FTTP deployment, Openreach believes it is essential to move all customers onto the new network quickly once built. In the first instance Openreach believes mass market adoption at competitive prices5 can be pursued through commercial agreements with CPs, and will explore models to achieve this in parallel with accelerating its FTTP build.Ultimately a ‘switchover’ process will be required, moving all customers onto the FTTP network so that everyone benefits.Openreach will consult with CPs and other stakeholders on how this can be achieved in due course.

To maintain momentum on building more FTTP into the 2020s, a supportive regulatory and public policy framework is essential.Openreach is encouraged by its initial engagement with both Ofcom and Government, and looks forward to continuing to work with both to secure the right conditions for sustained commercial investment. Key requirements include:

ii. certainty around the fair bet framework to ensure that initial and subsequent rounds of investment have the opportunity to earn returns that fully reflect the risk taken at the time of investment, and where competition is effective, greater commercial freedom;

*Developed at BT’s world-leading research and development facility at Adastral Park, Suffolk, Gfast technology changes the way today’s broadband is transmitted. It allows ultrafast speeds, which previously required fibre optic cables to be run all the way to a property (FTTP), to be transmitted over existing copper lines and fibre broadband cabinets. This is significant as Gfast will enable Openreach to make ultrafast fibre available more quickly to a much larger number of homes and businesses than if it focused on FTTP alone.

** “Cumulo rates‟ is the phrase used to describe a tax on commercial property. The “commercial property” taxed in this way is defined by the Valuation Office Agency (“VOA”) as BT‟s network (ducts, poles, parts of exchange buildings and other assets).

1Defined as a proportion of GDP - according to Boston Consulting Group research.

2 The Fibre First programme will see Openreach build FTTP to a further c.800,000 premises in BDUK areas and new housing sites, and to c.1.7 million premises in towns and cities.

3FTTP connections can deliver ultrafast speeds up to 1Gbps

4 Openreach has already provided 500,000 residential premises in Britain with access to FTTP, the majority of which are rural areas.