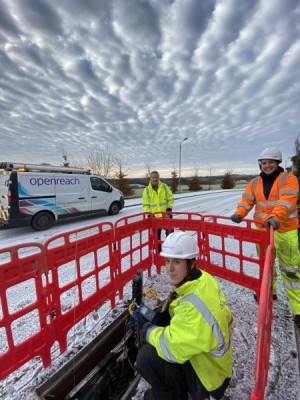 Eight more Scottish locations – including Stirling, Kirkcaldy and Gourock – are set to benefit from a major broadband boost thanks to a £16.2 million[1] investment by Openreach, the UK’s largest digital network provider used by the likes of BT, Sky, TalkTalk, Vodafone and Zen.

Another 54,000 homes and businesses are included in the latest ultrafast full fibre upgrade, with the new network to be built to the majority of premises in Stirling and Bridge of Allan; Kirkcaldy, Dysart and North Glenrothes in Fife; Carnoustie and Monifieth in Angus; and Gourock in Inverclyde.

It follows plans announced last year for nearly a million more Scottish homes and businesses to be given access to Openreach’s new gigabit-capable network, including 300,000 in rural and harder to serve areas. The build has now passed more than 530,000 properties across Scotland, including 20,000 business premises, in places like Aviemore, Aberdeen and Ardrossan.

Robert Thorburn, Openreach’s partnership director for Scotland, said: “Nobody in Scotland is building full fibre faster, further or at a higher quality than Openreach. Full fibre is the gold standard in gigabit broadband and more future-proof than other technologies.

“We’re reaching more communities than ever and our highly-skilled engineers, alongside our build partners, are working hard to deliver some of the fastest and most reliable broadband available anywhere in Europe.

“In 2021 our engineers built around 770 metres of new broadband cables every minute – making ultrafast broadband available to another home every 13 seconds. We’ve already reached more than half a million Scottish homes and businesses, but we know there’s more to do – and we’re committed to doing it.”

“Bringing full fibre broadband to more urban and rural communities will help protect livelihoods and ensure people remain connected while we continue to recover from the effects of the global pandemic.

“With 54,000 more premises set to benefit from gigabit capable speeds, I look forward to seeing where Openreach goes to next.”

Dr Liz Cameron CBE, Director and Chief Executive of Scottish Chambers of Commerce, added: “This is a great investment and roll-out by Openreach.  Expanding gigabit-capable full fibre broadband to more businesses, homes and locations is exactly the type of infrastructure investment Scotland needs.

“Digital connectivity is embedded into every aspect of our lives, more so now than ever before, and this latest milestone means more communities will be able to access faster, reliable and more consistent speeds.”

Across Scotland, 124,000 homes and businesses have already ordered a full fibre service from a range of retail service providers using the Openreach network. But another 406,000 could be benefiting and have yet to upgrade.

Research by the Centre for Economics and Business Research (Cebr) highlighted the clear economic benefits of connecting everyone in Scotland to full fibre, estimating it would create a £4.6 billion boost to the local economy.

Openreach engineers have been working hard to make the technology available to as many people as possible throughout the UK, and the company’s plans are fundamental to UK and Scottish Government targets.

The company will invest billions of pounds to reach a total of 25 million UK premises by the end of December 2026, including more than six million in the hardest-to-serve parts of the UK defined by industry regulator Ofcom.

Openreach employs more than 3,700 people across Scotland, with hundreds more working on the roll-out of full fibre broadband in the supply chain. You can find out more about our Fibre First programme, latest availability and local plans here.