Lockdown, sport and festivities – the story behind the UK’s record 2021 broadband use 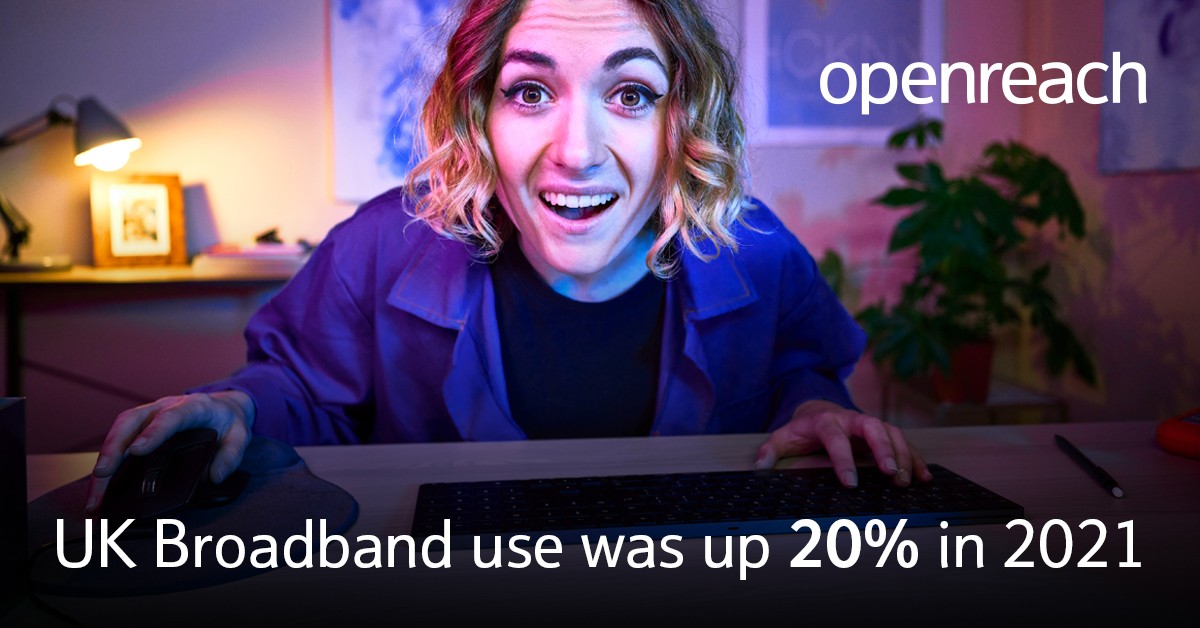 Millions of people working from home, an increase in online sports broadcasts and getting into the festive spirit have driven a 20 per cent increase in broadband traffic during 2021.

This follows last year where broadband usage more than doubled with 50,000 Petabytes (PB) of data being consumed across the country, compared to around 22,000 in 2019[1].

Openreach – the UK’s largest broadband network, used by customers of BT, Sky, TalkTalk, Vodafone, Zen and many more - has shared its annual broadband report, based on the broadband consumption of more than 17 million premises using its fibre network, into how much data is used by millions of UK homes and businesses.

The data shows that people in the UK use their broadband connections the most between 9pm and 10pm, and that the nation’s busiest day of the week for being online is typically a Saturday or Sunday.

The increase in data consumption was most obvious during the early part of the year, when people were again ordered to stay at home due to Covid-19, but the busiest single day on the network was Sunday 5 December 2021, when a record 222 Petabytes (PB) of data was consumed across the Openreach fibre network.

There was no single online event that stood out that day, but with bad weather across much of the UK and increasing rates of Covid, it’s thought people chose to spend more time in their homes, getting ready for Christmas and potentially streaming festive films and music.

Reflecting on another busy year for the company’s network team, Colin Lees, Openreach’s Chief Technology and Information Officer, said: “We’ve had another bumper year where our network has played a critical role in keeping the UK’s homes and businesses connected. Data usage continues to increase, partly down to a change in how we’re living our lives, but also because more people have access to faster speeds thanks to our fibre build, so can do more.

“It was an incredibly busy start to the year as another national lockdown, this time during the winter months, meant that most of us spent huge amounts of time at home. People working from home during the day and spending their evenings streaming or gaming all added up to records once again being broken.

“We saw very noticeable peaks throughout February as the lockdown continued, temperatures dropped and the Six Nations international rugby tournament got underway in empty stadiums. In fact, three of our busiest days were across two weekends as Rounds One and Two of fixtures got underway and were available to watch online.

“But I’m pleased to say that our network stood up to the test. We have a team of tech experts working hard behind-the scenes to make sure there’s enough network capacity for every eventuality. They’re constantly preparing for things such as major retail events like Black Friday or the release of the latest big-ticket TV and film/sports streaming on services like Netflix and Amazon.”

Key findings for 2021 broadband use across the Openreach network:

Openreach is on a mission to upgrade the nation’s broadband to Ultrafast Full Fibre. With building work continuing throughout 2021, more than six million homes and businesses can now place an order for Full Fibre, which is more reliable, faster and future-proof.

Customers can check if the build has reached their area yet or what the latest plans are for their postcode at openreach.co.uk. Those who are able to order a Full Fibre service will need to contact their service provider to request an upgrade.

[2] One Petabyte equals one million Gigabytes and on average a 4K quality movie stream uses about 7.2GB gigabits per hour.

[3] Press release published on 30th December, with one remaining day in December to be monitored for network traffic data.

Lockdown, sport and festivities – the story behind the UK’s record 2021 broadband use