Where do you live?

What did you do before working for Openreach?

I served in the Royal Military Police for seven-and-a-half years within the British Army.

Where did you serve and what was the biggest challenge you faced?

I’ve served in various locations across the world including Germany, Afghanistan, Canada, Kenya and the Falkland Islands. There were many challenges I faced during my time in the Royal Military Police but I’d say the main challenge was going away from my family for a long period of time.

How did you find out about Openreach and why did you choose a career in engineering?

I found out about Openreach through the Career Transition Partnership (CTP) programme which offers advice and guidance to services leavers. I was informed by the CTP team that Openreach has a large number of employees that are ex-forces. 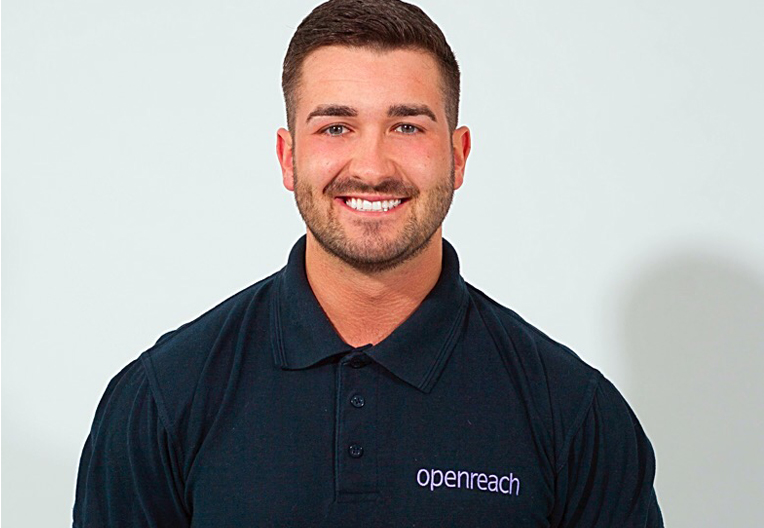 What was your experience of the transition period?

Initially, I was uneasy about leaving the forces and coming out into the “civilian world” as you hear lots of negative stories about people not finding jobs etc. The CTP team kept me on track and gave me advice and avenues to go down. They forever mentioned that us “Service Leavers” have so much to offer to any organisation due to our skills and qualities.

How did you feel at the time?

I was initially uneasy and a little nervous. As the weeks passed I started to gain a lot of confidence and excitement due to the advice and direction I was given. The best advice I would give to a Service Leaver is to start early and don’t leave everything to the last minute.

What do you do?

I’m typically called a CAL/OMI (customer apparatus and line one man installer) engineer. I’m involved in installation and repair of customers fixed telephone lines – covering residential customers as well as businesses on behalf of a variety of communication providers.

How long have you done your current job for?

I’ve been in this role for eight months now and have been working alone for around five months. I have four months left in my trainee programme after which I’ll go into a frontline team as long as I pass my NVQ.

Are there any similarities between Openreach and the forces?

There are many similarities between Openreach and the forces. Several of my Openreach trainers and managers are ex-forces so already we have the mentality of getting the job completed correctly the first time. We’re expected to be on time with appointments and keep physically fit as working for Openreach is a physically demanding job.

The biggest similarity I think between Openreach and the forces is discipline. We’re expected to look the part as we’re representing Openreach. Having a clean uniform and a good appearance is a must as we work in the public eye.

What skills are transferable between the forces and your current role?

There are many transferable skills that I have transferred over to my current role. Due to my role in the army, communication was key as it’s important to have verbal and non-verbal communication skills. This aids in my current role as I speak to many customers on a daily basis over the phone, by text and face to face. It’s important to me to build up a rapid rapport with the customer and to give them a positive experience.

Another key skill is problem solving. During my time in the army we were always told to think outside the box and come up with a solution. I currently work alone with my job role which means I don’t always have a helping hand by my side. It’s my job to go down all avenues and like the army, think outside the box. I, as many other ex-military, have the get-it-done attitude.

Job satisfaction. I meet someone new every day and I love hearing their stories. I’m a proper people person and enjoy creating relationships with them. When I install or repair their phone line, I can see firsthand that I’m making a difference. I usually work over my scheduled hours as I could be getting a customer’s business back into service or giving a family with children broadband. The extra effort I put into my work gives me satisfaction when I see a happy customer in the end. Their experience is vital to me.

The weather can sometimes make the job difficult. Especially when you’re at the top of a pole and it’s raining heavily. Openreach supply you with the best clothing for the numerous conditions you’ll face. I work in Scotland so it can be t-shirt weather one minute then the next it’s a jumper and a waterproof jacket weather. They key is to always be prepared.

Like we do in the army, I have set short, medium and long-term goals. It’s important to do this for personal development and career progression. My short-term goal is to pass my NVQ and be a fully qualified engineer with good knowledge in my role. My medium role is to become a senior engineer and be the “go to guy” within my team. I enjoy the responsibility and helping people. My long-term goal is to hopefully get a managerial position. I love working on the tools but my last role in the army was a section supervisor which I enjoyed.

See yourself at Openreach? Find out more and apply.