What to expect in weeks two–five of training

I was so excited about week two.

This was our group’s first week at Bolton. I’m in such a good training group where we all really get on. I was happy too, as I got to travel home in the evenings and see my family.

The first part of week two was ‘EUSR’ (Energy & Utility Skills Register), which is a health and safety qualification. You can tell that health and safety is the main priority for Openreach, which means they really care for your welfare and want to make sure you get home to your family at the end of the day.

The EUSR course was really interesting and Brian – the trainer – made it fun, too. The rest of week two was spent with Stephen Brady. He did the “Your Visit Counts” training – this was all about putting the customer at the heart of everything you do.

Stephen had some funny stories from when he was a manager and also from when he was out in the field. You could really tell that he knows the job inside and out. We learnt about how to speak to customers and that personal situations shouldn’t affect how you speak to customers. Coming from a strong customer service background really helped me with this part of the week.

The next part of week two was spent in Rossendale. This is where I’ll be based, so it was exciting to see the exchange. We had frames training (training in a telephone exchange) here for two days before a week of frames buddying and our frames accreditation. 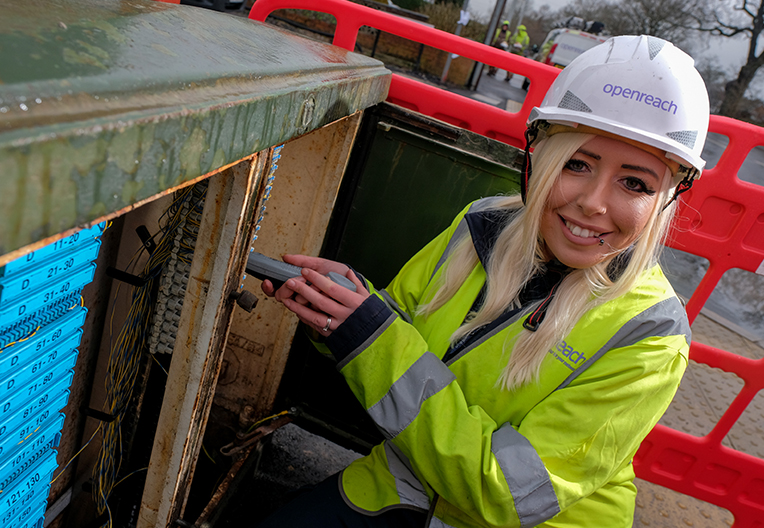 Stephen was excellent at explaining the working of the exchange. We were in and out of the classroom looking at the exchange after he’d explained how it works. It was great to be able to see things instead of just talking about them. It was also brilliant to start to understand how what we are doing keeps customers connected.

Week three was frames buddying. I was put with an experienced engineer who specialises in frames – Chris Thom. I can’t thank Chris enough for the training and encouragement he gave me during week three. We didn’t sit in front of a computer all week – we spent the week touring exchanges and doing live jobs. He even showed us how to pick up live jobs on “My Jobs” which is the app for getting your work.

I felt like a real engineer during week three.

It was amazing hearing the dial tone on my test telephone when I’d actually got a real customer connected. I also absolutely LOVED soldering. I’d never done it before and it was great to learn how to do it – but mainly how to do it neatly and well.

I had my assessment on the Friday and I passed with flying colours. Chris even said I had the most promise on the frames that he’d ever seen. I could have cried, I was that happy!

"I felt like a real engineer during week three. I’ve grown so much in confidence."

This week we did our poles, steps and ladders course. This is over two days. On the first day you’re shown how to extend ladders, climb them to the top and how to pull a drill up once you’re there. The second day is all about climbing the pole. You have to be fitted with a harness and ensure you’re safe at all times.

This week has been my hardest week. I hadn’t prepared myself for how I’d feel. I’ve done Go Ape a few times and felt fine. I mean, I had the adrenaline rush when looking down but I’ve completed the courses and five minutes into them I’ve loved them!

I hadn’t climbed a normal ladder before and my dad fell a long way off a ladder and had over 100 stitches in his face as a result. He hasn’t been able to work properly since, but this was around 10 years ago. I guess it may have affected me on the day. I did end up climbing the ladder and pulling the drill up to the top but it did take a few attempts.

I thought I’d be better on the pole but when it came to actually getting to the top I couldn’t do it. I tried again and again and ended up getting off the ladder and onto the pole.

There were lots of tears and frustration, but I was determined to do it. This was mainly down to the support I’ve received on LinkedIn. I’ve been given tips from so many engineers on there and it’s really helped my self-confidence. The support from engineers and instructors here at Bolton has been overwhelming, too. I’ve had instructors offering to give up their dinner hours to help me get there, which has been so amazing. So a big thanks to Chris and Steve.

I knew once I defeated the pole for the first time I would be fine to do it over and over again.

Because I needed a bit more practice on the poles, I needed to join another group. It was daunting but it just meant more friends to make. I will miss my first group and I was so proud of how well they did on the poles! It was amazing to watch.

Since poles, steps and ladders we’ve done our course on “ground works” which I also passed. It’s been interesting to learn about traffic controls and how safety conscious you need to be.

After some further coaching with another instructor I managed to get to the top of the pole! I was over the moon. 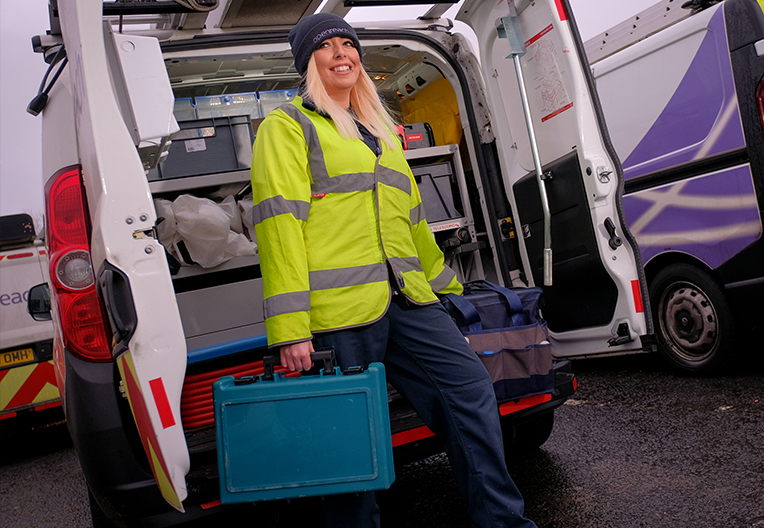 I’ve grown so much in confidence up and down ladders and poles. I literally get straight up there and love it too.

Since Tuesday I’ve been buddying with Laura and watching her solve some really tricky fibre faults. We’ve traced where underground feeds come in to houses and looked at some crazy wiring. It’s been really fun!

I love seeing how different engineers work and their different styles of problem solving.