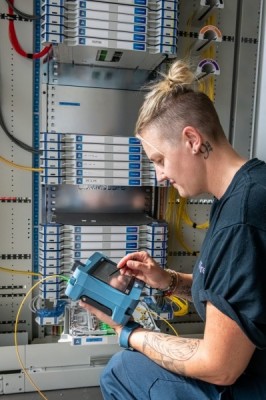 Data released today by Openreach – the UK’s largest broadband network, used by customers of BT, Plusnet, Sky, TalkTalk, Vodafone and Zen – shows that broadband usage more than doubled in 2020 with 50,000 Petabytes (PB) of data[1] being consumed across the country, compared to around 22,000[2] in 2019.

During 2020, the daily record for broadband use has also been broken 15 times, and the average property connected to Openreach’s fibre networks used around 3,000 Gigabytes (GB) of data, or around 9GB per day. That’s the equivalent of between two and three HD movies being streamed in every house in the country, every day.

Reasons thought to be driving the big jump in broadband usage include an increase in home working and video conferencing due to the Coronavirus pandemic, more live sports being screened online by the likes of Amazon Prime Video, and large updates to Playstation and Xbox games consoles, including popular gaming titles such as Call of Duty.

The busiest day for the UK’s broadband was Boxing Day, Saturday 26th December 2020, when a record 210 Petabytes (PB) was consumed across Openreach’s fibre networks.

On that day, a mix of video calls to get in touch with family and friends (during heightened Coronavirus restrictions) as well as TV streaming and gaming downloads were all contributing factors.

Reflecting on a record-breaking 2020, Colin Lees, Chief Technology and Information Officer, Openreach said: “It’s been a year unlike any other and we believe that’s played a major part in this huge jump in data consumption. We know more businesses asked their employees to work from home throughout most of 2020, so connecting remotely has been and continues to be important for everyone.

“January and February saw data consumption at around 2,700PB per month - before the pandemic brought about a big increase – with most months at more than 4,000PB - for the rest of the year.

“In terms of capacity, our network has coped well during the pandemic. We have a team of tech experts working hard behind-the scenes to make sure there’s enough network capacity for every eventuality. They’re constantly preparing for things such as major retail events like Black Friday or the release of the latest big ticket TV and film titles on streaming services like Netflix and Amazon.”

Openreach is on a mission, with the right investment conditions, to upgrade the nation’s biggest broadband network through its £12 billion Full Fibre programme. With building work continuing throughout 2020, more than four million homes and businesses can now order a ‘Full Fibre’ service – which is more reliable, faster and future-proof. Customers can check if the network build has reached their area yet or what the latest plans are for their postcode at openreach.co.uk. Those who are able to order a Full Fibre service will need to contact their service provider to request an upgrade.

To support the build and improving service levels, Openreach announced more than 5,000 new engineering roles last month, including more than 2,500 full-time jobs in its service and network build divisions, as well as an estimated 2,800 positions with partners.

Key findings for 2020 broadband use across the Openreach network:

Openreach’s network has continued to cope with the demands placed upon it, with no major outages throughout 2020.

If you’re experiencing problems with your broadband network, there's lots of guidance, hints and tips on the Openreach website here.

[1] One Petabyte equals one million Gigabytes and on average a 4K quality movie stream uses about 7.2GB gigabits per hour.