Summary
Coventry has been announced as the latest area to benefit from Openreach’s ‘Fibre First’ programme, where fibre optic cables are laid from the exchange right to people’s front doors. 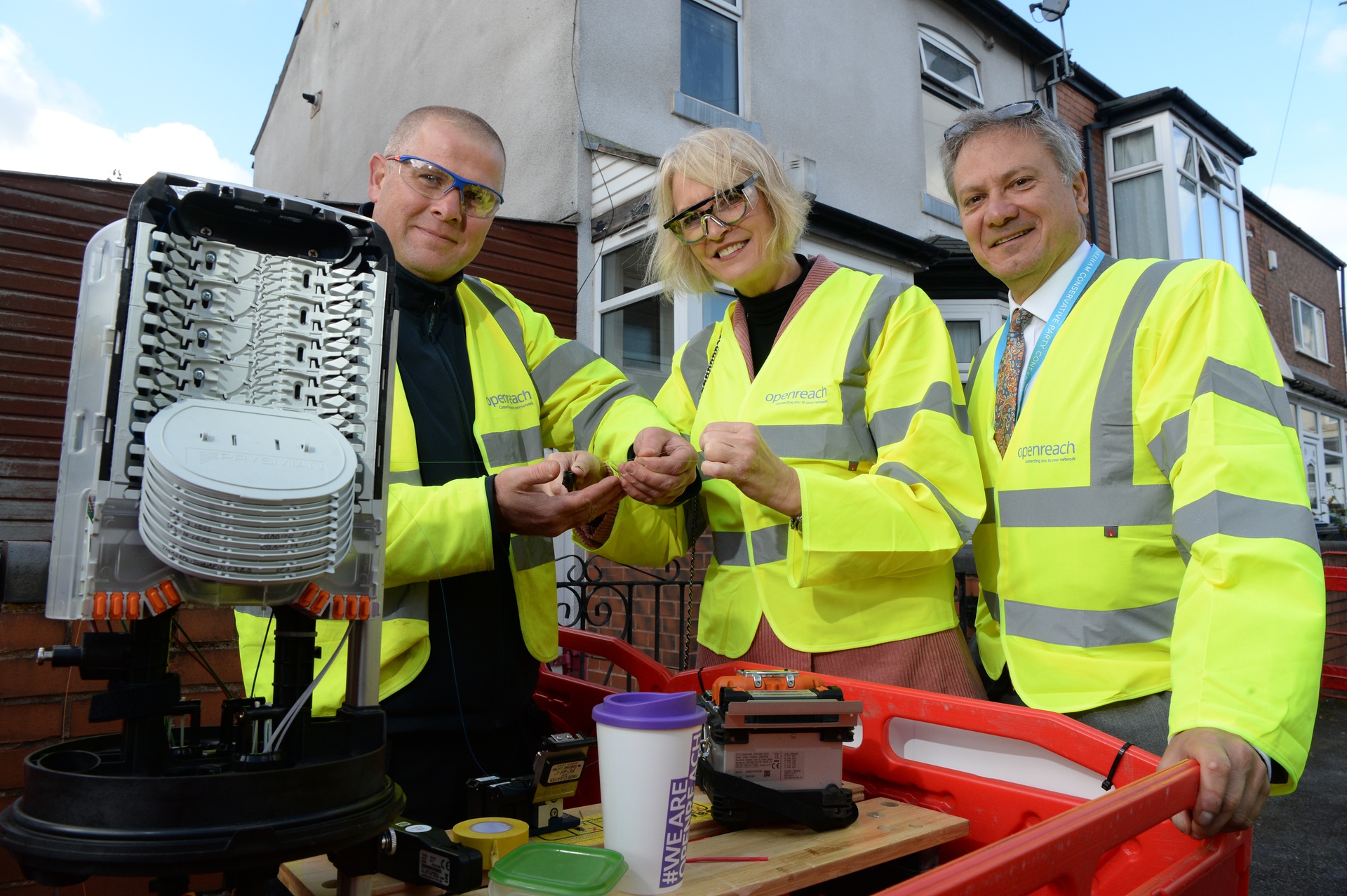 Coventry has been announced as the latest area to benefit from Openreach’s ‘Fibre First’ programme, where fibre optic cables are laid from the exchange right to people’s front doors.

The UK’s largest telephone and broadband network is making new, more reliable, and more resilient Fibre-to-the-Premises (FTTP) technology available to tens of thousands of homes and businesses across the city, with Radford being the first area to benefit.

As well as adding even more reliability and resilience to the network, meaning the connection is less likely to drop out, FTTP brings speeds of up to 1 Gbps, which is about 24 times faster than the current UK average of 46Mbps. This provides even greater capacity for multiple devices and things like on-demand video, Virtual Reality gaming and smart homes. The fibre connection will future proof the homes and businesses of Coventry for decades to come and ensure that the UK stays competitive on the world stage.

Recognising the progress being made, Margot James, Digital Minister, said:

”Making sure that people have access to full fibre broadband, as quickly as is realistically possible, is of huge importance. It’s great to see Openreach making significant progress in the West Midlands, adding Coventry to the list of areas to benefit from the early stages of the programme. And it was really interesting to get a behind the scenes look at the civil engineering work that’s at the forefront of introducing this new technology.”

“This is fantastic for Coventry and puts the city right at the forefront of Openreach’s work to expand the network across the region. I want to make sure every business and household across the West Midlands has access to the best possible broadband speeds, and this announcement of new fibre right to people’s homes and offices is great news for Coventry and the people who live and work here. The fibre announced today will also support our ambition to be the first 5G region in the UK and will complement the £75M we are investing with the Government in this new technology.”

Coventry joins ten areas across the UK to benefit from the first phase of Openreach’s multi-million-pound fibre investment, which will initially connect up to 40 UK towns, cities and boroughs, as part of a bigger plan to reach three million homes and businesses by the end of 2020.

“We are making significant progress in the West Midlands as we get on with building the infrastructure Britain needs to stay ahead in the global digital economy. I’m delighted to announce that families and businesses in Coventry will soon be among the first in the UK to benefit from this commitment.

“Our engineers have so far built full fibre broadband technology to more than 600,000 premises and are already working in nearby Birmingham, which was one of the first ‘fibre cities’ announced earlier this year. Despite the challenges of planning, street works and permissions, we’re reaching thousands of homes each week and we’re on track for our ambition of reaching 10 million premises by the mid-2020s.”

In Birmingham, Margot James, the Digital Minister, met with Openreach’s CEO to check on progress of the Fibre First rollout there. Work is already well underway to connect tens of thousands of premises to the new network, with some of the first places to benefit including Erdington, Great Barr, Streetly and Sutton Coldfield.

As well as meeting with some of the engineers working on Openreach’s Fibre First programme, the MP also took the opportunity to join together two pieces of fibre cable, using state-of-the-art splicing equipment that’s being used across the city.

The work in Coventry and Birmingham is a further boost for the West Midlands, which earlier this year heard it would benefit from Openreach’s unprecedented recruitment drive: more than 200 new trainee engineers are being employed across the region to help deliver ultrafast broadband.

Find out more about Openreach’s First First programme at openreach.co.uk/fibrefirst.