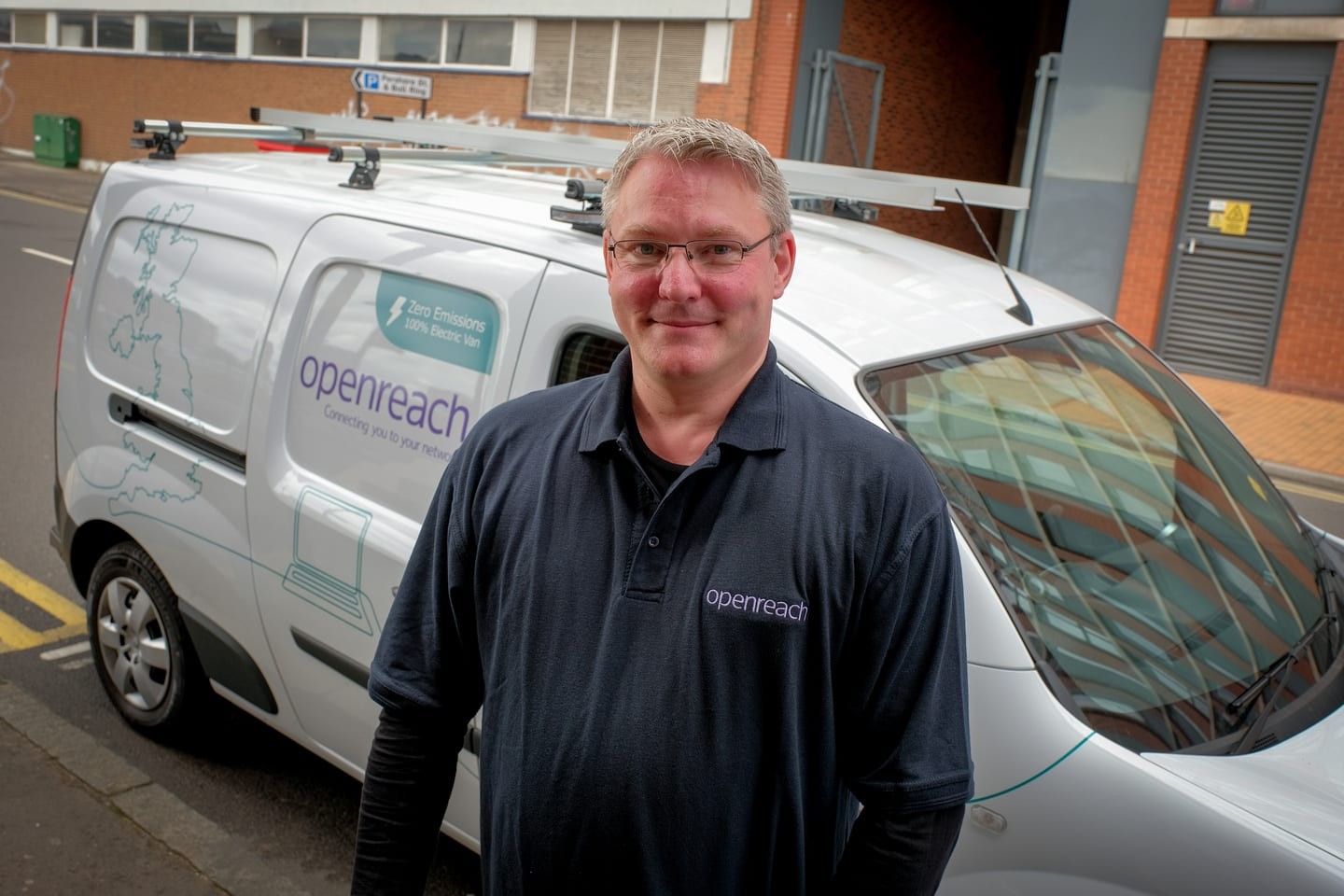 Openreach has given the ‘green’ light to its first fully operational electric vans in a bid to reduce CO2 and eliminate exhaust pollution.

The new vehicles, sporting a special design to spell out their green credentials, took to the roads of Birmingham this week. They’ll play a key role in delivering and maintaining Openreach’s fibre broadband network and hopefully pave the way for more widespread electric vehicles deployments in the future.

Clive Selley, CEO of Openreach, said: “These first electric vans are an important milestone on our journey to a low carbon future. The potential for environmental benefit, if we can successfully integrate electric vans into our fleet, is enormous. Through this pilot we will learn practical lessons about the best way to use and charge the vehicles and develop systems which would help us make far greater use of electric vehicles in the future.”

Currently 15 electric vans are included in the national pilot – seven of which are in Birmingham. Charging points have been installed at various exchange buildings, as well as home locations, so vans can be charged overnight.

A high percentage of Openreach engineers keep their vans at their home address so being able to successfully run an electric vehicle from home is therefore vital to making the pilot a success. The pilot will help to form an understanding of how to manage the installation of charging points at scale, help to test vehicles in different scenarios and open up informed conversations with manufacturers about long-term needs.

Clive added: “We’re absolutely committed to decarbonise our business and doing our bit to cut air pollution, so this pilot will be key to making that happen. The number of vans may be small in comparison to our fleet, but the lessons we’ll learn will be critical to making any larger transformation a reality.”

Openreach engineer, Dave Griffin, who lives in Birmingham, is trialling one of the electric vans. He said: “I’m really pleased to be involved with this pilot and to have the opportunity to drive an electric van. I’ve never driven one before – and it’s noticeably quieter than our usual vans. It’s a breath of fresh air in every way, and it’s good to support the company’s efforts to enhance our green credentials even further. It’s still early stages but it’s going really well so far and I look forward to testing it further.

“I was particularly interested in the battery life and how that would last. So far there have been no issues, with a full charge easily enabling me to easily do a full day of work. It’s also a bit of a talking point as with the new green livery, I’m finding colleagues are really interested and see it as a positive thing. Many people are trying to live a ‘greener’ life, so it’s important we back that up in the way we work.”

As a wholly owned subsidiary of BT Group, Openreach has its part to play in supporting BT’s ambitions to decarbonise its business.

BT has pledged to be a net zero emission business by 2045 and has a goal to reduce the carbon emissions of its customers by at least three times BT’s end-to-end carbon footprint by 2020. This has led to a drive in innovation in products and services as well as emission reduction.

At the UN Framework Convention on Climate Change meeting in Poland last December, BT Group announced it was signing up to EV100 - a global initiative bringing together forward looking companies committed to accelerating the transition to EVs - underlining plans to decarbonise its entire fleet of vehicles and adopt electric vehicles where they are the best solution and other low carbon fuels where they are not.