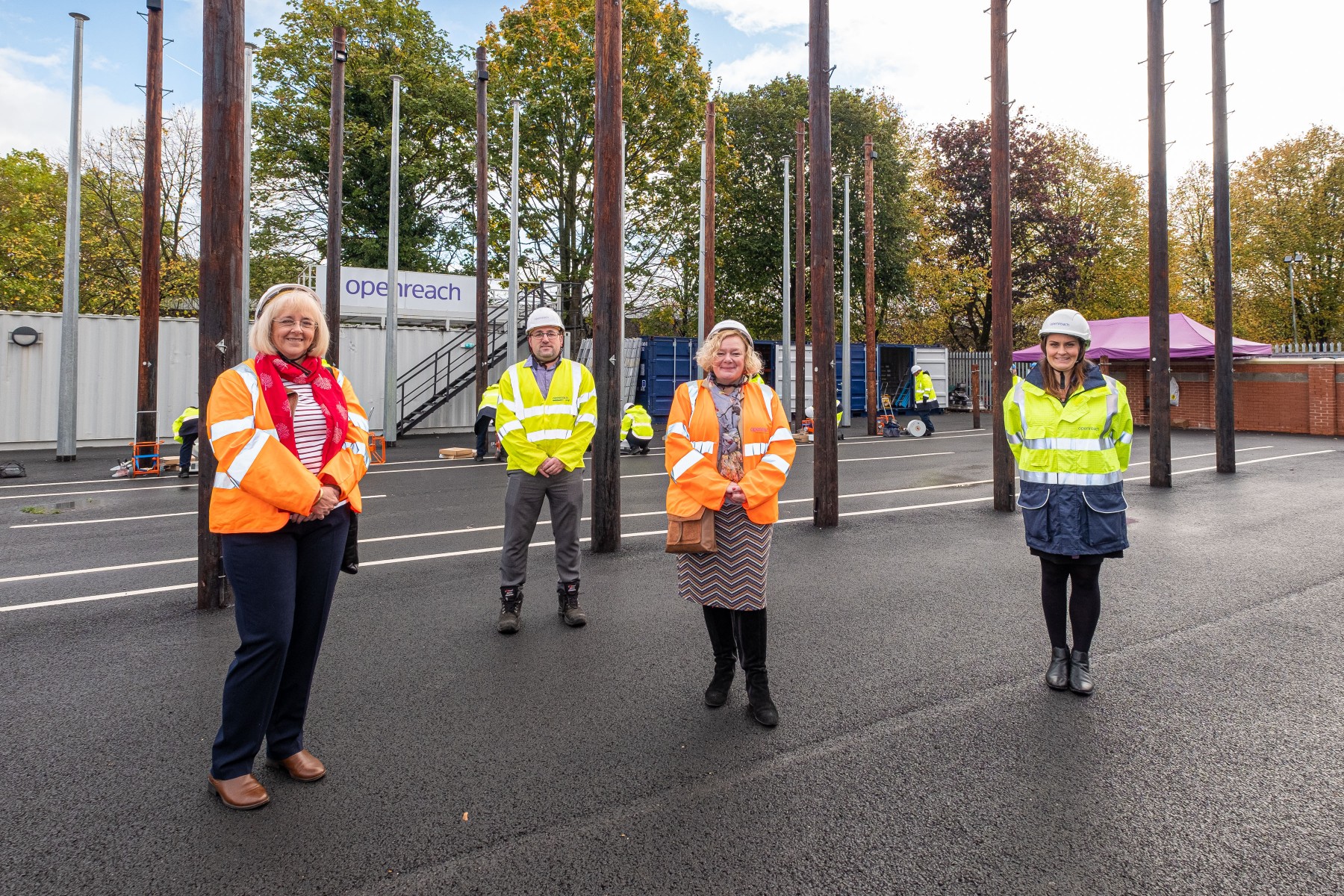 Councillor Jane Mudd and Ruth Jones MP recently visited the brand new National Learning Centre for Wales to witness first-hand how Openreach engineers are being trained to provide Newport and the rest of Wales with ultrafast full fibre broadband.

Based in Newport, the state-of-the art new learning centre will give trainee Openreach engineers the opportunity to learn the ropes and test their skills in a replica street, built from scratch to recreate the real network in the outside world.

Up to 6,000 new and existing Openreach engineers from across Wales, as well as further afield, are expected to train at the Newport centre during a typical year as the company accelerates its flagship full fibre broadband deployment across the country.

During her recent visit to the new National Learning Centre for Wales, Cllr Jane Mudd, Leader of Newport City Council, said: “It’s welcoming to see how important Newport is to Openreach and their ambitious plans of bringing ultrafast full fibre to the rest of Wales and the UK.”

Ruth Jones MP for Newport West added: "It was great to see how Newport and the National Learning Centre for Wales is at the very heart of Openreach's commitment to teach the country's next generation of telecom engineers.”

“The National Learning Centre will help train the thousands of engineers that are needed to build this new state of the art infrastructure. It's really good to know that this centre of learning will bring trainees from all over the UK to learn new skills, provide jobs for people in Newport West, and of course showcase all that Newport has to offer."

Connie Dixon, Openreach’s Partnership Director for Wales, said: “Our National Learning Centre for Wales is testimony to our commitment to not only continued learning and development but also to Newport and the rest of Wales.”

“Our network underpins the economy the length and breadth of Wales, bringing a vital service to communities in both urban and rural areas. We’re proud of our track record but recognise there is still more to do.”

“We’re investing now for the future so that we have the local, skilled and experienced workforce needed to deliver a full fibre future for Wales to keep communities connected, with better service, broader coverage and faster broadband speeds for all.”

Across Wales, Openreach already employs more than 2,500 people and since April 2018 the company has hired more than 600 new trainee engineers throughout the nation, with recruitment ongoing.

The new engineers will be key to delivering the company’s ‘Fibre First’ programme, which is bringing faster, more reliable and future proof Fibre to the Premises (FTTP) broadband technology to millions of front doors across Wales and the rest of the UK. Openreach is investing heavily to build its ultrafast full fibre technology to a total of 25 million premises across the UK, including more than six million in the hardest-to-serve parts of the country by the end of 2026.

More than 400,000 homes and businesses in Wales can already order our ultrafast, ultra-reliable full fibre broadband via dozens of retail Communications Providers who use the Openreach network.

The business has made a number of recent announcements about its build plans for Wales – including an additional 87,000 properties that are set to benefit across south Wales. This is in addition to the hundreds of thousands of properties that have already been announced across every single Welsh local authority area. The company is also working in partnership with Welsh Government to reach those that are in the final 5%.

Recent research by the Centre for Economics and Business Research (Cebr) highlighted the clear economic, social and environmental benefits of connecting everyone in Wales to full fibre. It estimated this would create a £2 billion boost to the local economy.