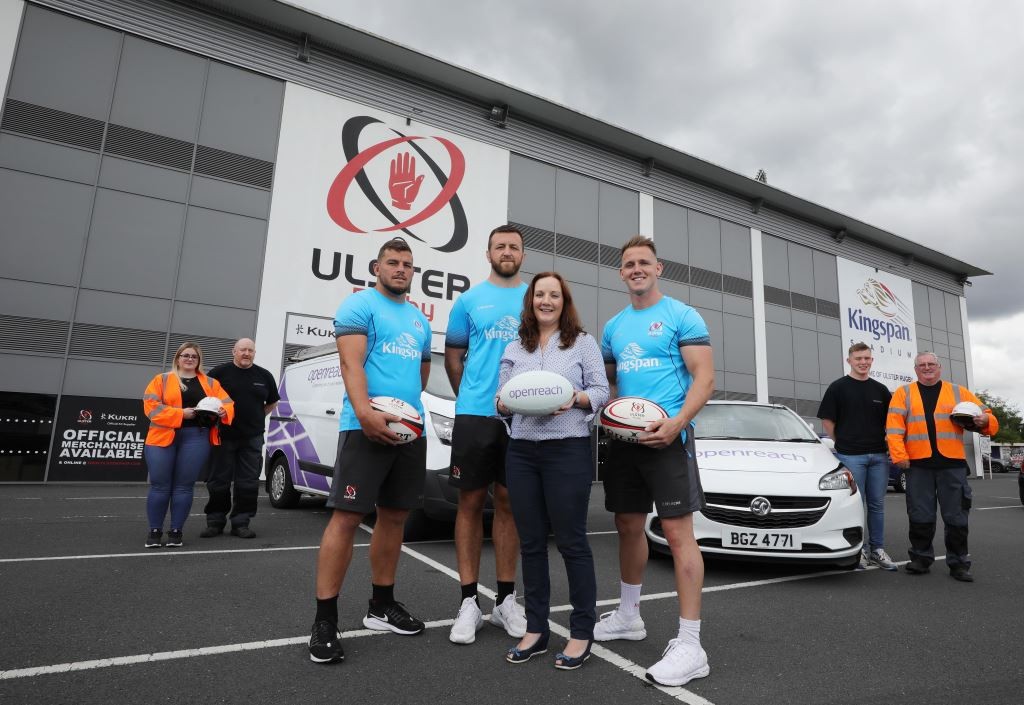 Openreach has announced a four-year sponsorship deal with Ulster Rugby – becoming one of the club’s official title sponsors from the beginning of this season.

The sponsorship, the first of its kind for the company, will give Openreach a visible presence with branding across Kingspan Stadium as well as appearing on the playing kit. The company has secured exclusive rights to have the Openreach logo on the right-hand sleeve of the Ulster Rugby team’s playing shirt, which is due to be unveiled by Ulster Rugby in late August.

Openreach is the engineering team that builds, maintains and manages the broadband network in Northern Ireland.  Most Communications Providers in the region use this open access network to connect their customers to landline, mobile, broadband, TV and data services.

Openreach’s ambition is to drive Northern Ireland’s digital future through its ‘Fibre First’ programme and it is in the process of rolling out its new future-proof ‘Fibre to the Premises’ (FTTP) broadband technology to homes and businesses.

The partnership was announced at Kingspan Stadium by Openreach’s Director in Northern Ireland, Mairead Meyer, who was joined by Craig Gilroy, Alan O’Connor and Sean Reidy from Ulster Rugby.

We are delighted to come on board as an official partner of Ulster Rugby. In common with one of European rugby’s most prestigious clubs, who use the power of sport and team spirit to connect fans across the globe, Openreach is a team of over 750, connecting people across Northern Ireland to their world – whatever that may be – through our world-class full fibre broadband network.

As a company we’re committed to building the infrastructure that Northern Ireland needs to stay at the forefront of broadband innovation and to compete in the global economy We aim to deliver the best possible digital connectivity to everyone. This four-year contract similarly cements Openreach as one of Ulster Rugby’s biggest supporters and demonstrates our commitment to investing in Northern Ireland. We are excited to partner with Ulster Rugby and will be working closely with them to ensure that fans get the very best experience for the seasons ahead

We are very pleased that Openreach has chosen to support Ulster Rugby over the next four years. Partnerships of this scale are critical for us as we look to remain competitive within professional rugby, while also developing grassroots participation across the Province.

Ulster Rugby and Openreach are ambitious and innovative organisations, and we share similar objectives in that we want to connect people and make a difference to society, with technology and sport as our key drivers. We are really looking forward to working closely with the team at Openreach and are hugely excited by their plans for the partnership.