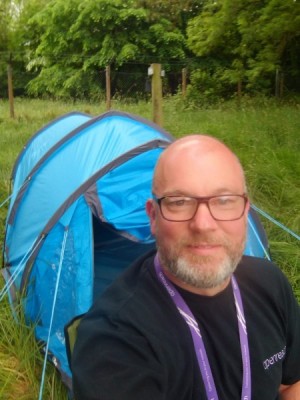 Openreach engineers spent four chilly nights under the stars to solve a broadband puzzle for residents of picturesque Pettinain village near Carstairs.

A specialist team from the Chief Engineer’s investigations unit was drafted in following repeated complaints from households in the Lanark community about their slow internet speeds.

Some residents had seen their download speeds drop from around 7Mbps to less than 0.5Mbps, making life in lockdown very difficult and working from home almost impossible.

Due to Covid-19 restrictions and the fact that one engineer’s vulnerable wife was shielding, the Openreach investigators set up tents at Abington’s Mount View Caravan Park instead of staying in a hotel.

Jim Vince, Chief Engineer for the project, said: “People in Pettinain had become increasingly frustrated by exceptionally slow broadband speeds, and we were determined to get to the bottom of it.

“We carried out a full network health check on the village, including sweeping the area with spectrum analysers to identify any clashing signals which were slowing down the broadband.

“We found that several factors had caused the speeds to plummet – including the distance of some properties from broadband equipment, much greater demands on a 20-year-old link, and interference from a high-voltage power line.

“Rather than just restore the service to what they’d had before, we set about finding a way to provide the worst affected households with superfast broadband speeds.

“And as the answer meant significant network reconfigurations, we camped out for four nights to get the work done. It was very cold but worth it to see the impact our efforts had on the community,” added Jim.

In the end, the engineers were able to include around 30 properties in the upgrade, and the affected households are now enjoying the same superfast speeds as the rest of the village.

Fin Stuart, Chair of Pettinain Community Council, said: “Everyone was struggling to do anything online due to the chronically slow speeds we were experiencing, which had dropped to less than 0.5Mbps. The Openreach team were welcomed with open arms when they arrived in the village.

“We have only the faintest knowledge of how complicated the job has been, but we now have superfast speeds of 35Mbps or more and it has completely changed life for the better. With people needing to work and school children from home, good connectivity has never been more essential.

“As well as upgrading the network, the team fixed small issues for several residents to get speeds up, and did it all with a smile. For much of their outdoor work the weather was chronic, and they continued until dark to get the job done. Everyone in the village has commented on the quality of service.”

For train driver Ian McLeod’s busy household, the internet is a lifeline. His wife Irene is an NHS admin manager at Wishaw Hospital, daughter Lorna is studying for National 5 qualifications and his in-laws are in their 80s, with one of them needing to shield due to an underlying health condition.

Ian said: “We were just about managing with our slow connection until Covid-19 arrived and that was the straw that broke the camel’s back. With everyone needing to be connected from home much more, it just wasn’t up to the job. We were getting constant drop-outs and engineers were having to come out weekly, to no avail.

“Now it’s like chalk and cheese. We have multiple smart devices connected, CCTV cameras and my wife’s electric car which uses an app for charging, and it all works perfectly. We’re in a very remote location, so the only way for our teenage daughter to socialize with friends is online, and now she’s able to access the work and classes school is providing.

“The engineers were marvellous and so helpful, giving constant updates and making sure everything went smoothly. So much of our everyday lives is now depend on the internet - going from super-slow to superfast has made a massive difference to us.”