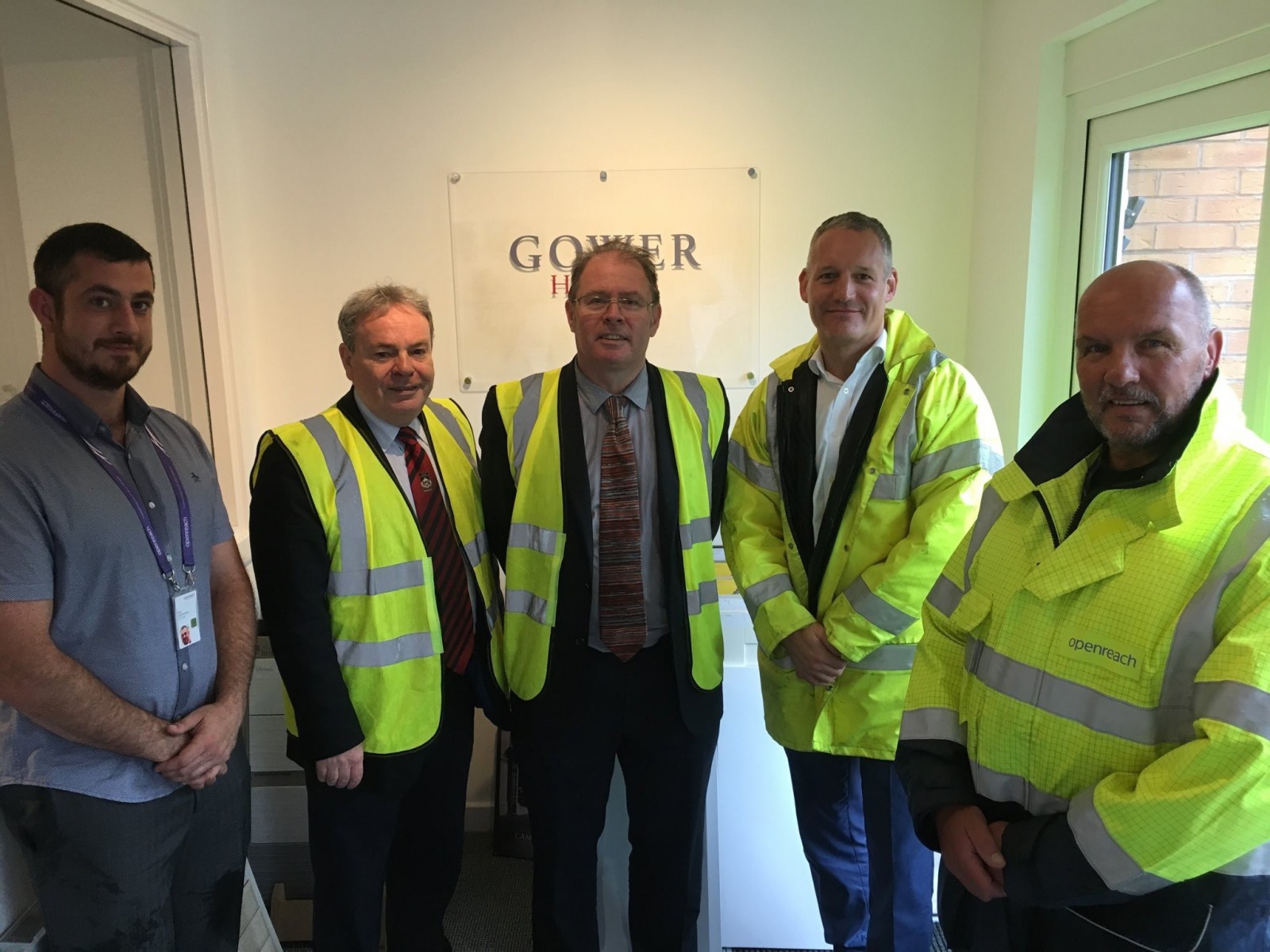 Ian Lucas MP for Wrexham has been meeting with Openreach, to see first-hand the next generation of broadband technology that’s coming to town.

A new housing development on the outskirts of Gwersyllt will have more than 50 family homes and enjoy some of the fastest and most reliable broadband speeds in the UK.

Each home on the Stansty Walks development will be connected to Openreach’s new future-proof ‘full fibre’ network which sees fibre optic cables run directly from the exchange to each home. The new technology can support speeds of up to 1 Gigabit per second (Gbps)[1] - 21 times faster than the UK’s current average.

Openreach, which installs this full-fibre infrastructure free of charge to all new housing developments of 30 premises or more, recently reduced the price charged to developers of smaller developments by 75 per cent. This means tens of thousands more new-build homes could be in line for a broadband boost.

Ian Lucas MP said: "It is good to see Openreach delivering fast, reliable, full fibre broadband to new homes in Wrexham. I receive a lot of correspondence from constituents and local businesses regarding broadband speeds and have worked hard to ensure Wrexham is not left behind when it comes to having high-quality connectivity. This is an ongoing process.”

"At the new Gower Homes site, I saw how a national organisation was working with a local company to deliver the best broadband technology. It was fascinating to be shown by the engineers exactly how each home is connected."

The visit was hosted by Matthew Kirkman, Openreach’s Director of Infrastructure Solutions, who said: “We’re working hard to make sure that futureproof full fibre technology is installed in all new developments across Wales, meaning new home owners can get the very best out of their broadband for work and leisure while accessing a competitive retail market through our open network.”

“Every major site in Wrexham will get full fibre free of charge but only one of the four smaller developments have opted to take advantage of our full-fibre offer. We’re keen to improve that so we’re building closer relationships with developers, both large and small, to urge them to make sure all new build homes are equipped with the fastest possible, future proofed broadband.”

Mr Lucas also got a general update on broadband services available throughout his constituency. Currently more than 97 per cent of homes and businesses in Wrexham can order broadband speeds of 30 megabits per second (Mbps) and above – which is enough to stream six HD movies simultaneously[2].

As well as its commercial investments, Openreach has been working closely with the Welsh and UK Governments, as part of the Superfast Cymru (SFC) partnership, to bring fibre-based broadband to communities which were not included in any upgrade plans by private companies.

Completed at the end of last year, SFC has brought superfast fibre-to-the-cabinet (FTTC) broadband to many communities throughout North Wales as well as full Fibre-to-the-Premises (FTTP) in areas where it is the best technical solution bringing access to ultrafast broadband speeds and reliability.

Openreach is currently working with the Welsh Government to upgrade a further 26,000 premises across Wales and the majority of these properties will be able to access ultrafast speeds once they are connected. The project is part of a package of measures from the Welsh Government to reach the remaining five per cent of Welsh premises without access to fast broadband, which includes broadband voucher schemes.

Across Wales more than 1.3 million homes and business premises can access fibre broadband with take-up currently at around 53 per cent meaning that around 600,000 properties have yet to take advantage of the improved broadband speeds and reliability that are now available to them

During the meeting, Mr. Lucas was also given an update on Openreach’s plans to reach four million UK homes and businesses with full fibre broadband by 2021 and its ambition to get to 15 million by the mid-2020s if the conditions are right.

Developers that want to make sure that people can enjoy the benefits of full fibre when they move into their new homes can register their new sites on the Openreach website.