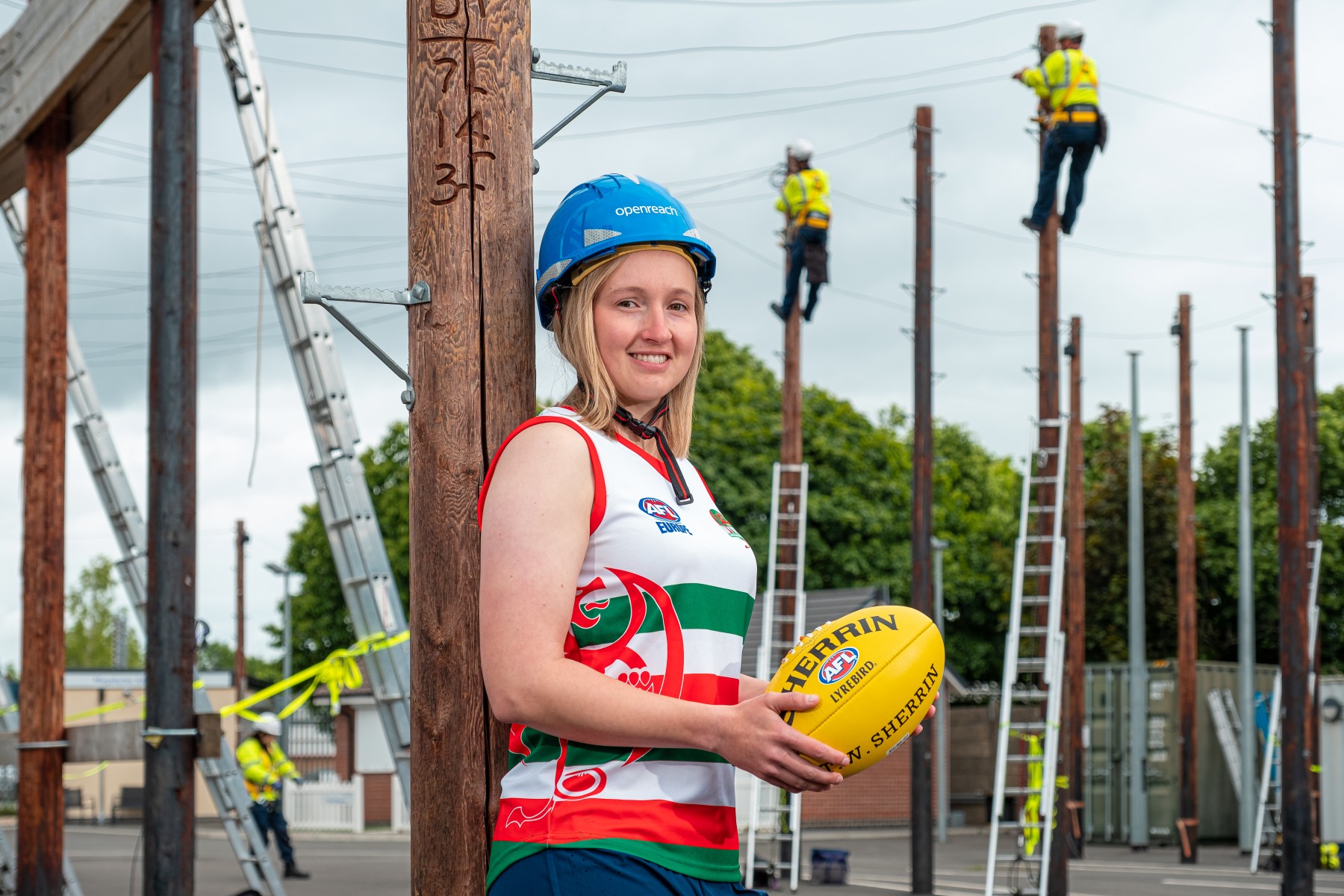 Openreach’s Kayleigh Tonge-Jones will be swapping her Openreach hard hat and safety equipment for a sleeveless Aussie Rules singlet when she steps out in Welsh colours at this year’s Aussie Rules European Finals in Scotland.

Kayleigh, who hails from Cardiff and works as an Openreach trainer has been picked to represent her country as Wales take on the rest of Europe in this year’s Women’s European Championship in Edinburgh, Scotland this weekend (18 June).

There are 11 teams competing in this year’s Championship and current holders Ireland remain favourites to win the top prize once again.

To make this all happen Kayleigh, who picked up an Aussie Rules ball for the first time a little over three months ago, is taking leave from work and financing the entire journey herself. From flights, accommodation and food Kayleigh and the rest of her squad will have to pay out of their own pocket to represent their country.

Kayleigh explains: “It’s an incredible honour to represent your country and I can’t wait to get out there and do my very best.”

“As an amateur sport we’re not financially renumerated in any way so have to fund the journey and everything that comes with it ourselves. From the kit we wear to the overnight accommodation we pay for everything. We even have to chip-in and pay for the referee’s!

“It’s going to be an incredible experience and will certainly make a change to showing trainee engineers how to safely climb poles or joint fibre cables.”

But this isn’t where Kayleigh’s sporting talents, or Openreach’s links with Aussie Rules, end.

Later his summer Kayleigh will be representing Wales once again but this time in touch rugby at the Women’s European Championships in Nottingham.

Openreach also has another Aussie Rules Welsh international on the books in the shape of Owain Ryland. Cardiff based Owain, who has previously represented Team GB, will also be making his way up to Scotland this weekend to represent Wales in the Men’s European Championship.

Kayleigh, who’s established a Go Fund me page to help fund her sporting dreams, joined Openreach a little under 7 years ago after graduating from South Wales University with a degree in Sport and Exercise Science straight out of university.

Starting as a trainee engineer learning how to fix faults on the line Kayleigh has since progressed within the business to becoming a trainer herself and currently works in Openreach’s state-of-the art National Learning Centre for Wales in Newport.

Openreach employs the UK’s largest team of telecoms engineers and professionals, and has committed to building a more diverse and inclusive team in an industry that’s traditionally been very white, male dominated. Last financial year, the company attracted around 530 women into trainee engineering roles – more than double the previous year. The boost was thanks partly to employing language experts to transform its job adverts and descriptions, making them gender neutral.

Openreach is well on track to reach 25 million UK homes and businesses with access to Full Fibre ultrafast broadband by December 2026 and has already reached around 450,000 properties across Wales.

With a workforce of around 2,300 across Wales, Openreach already employs the nation’s largest team of telecoms engineers and professionals. The business recently announced that it would create and fill around 250 additional jobs throughout Wales during 2022 as it continues to invest billions of pounds into its UK broadband network, people and training. 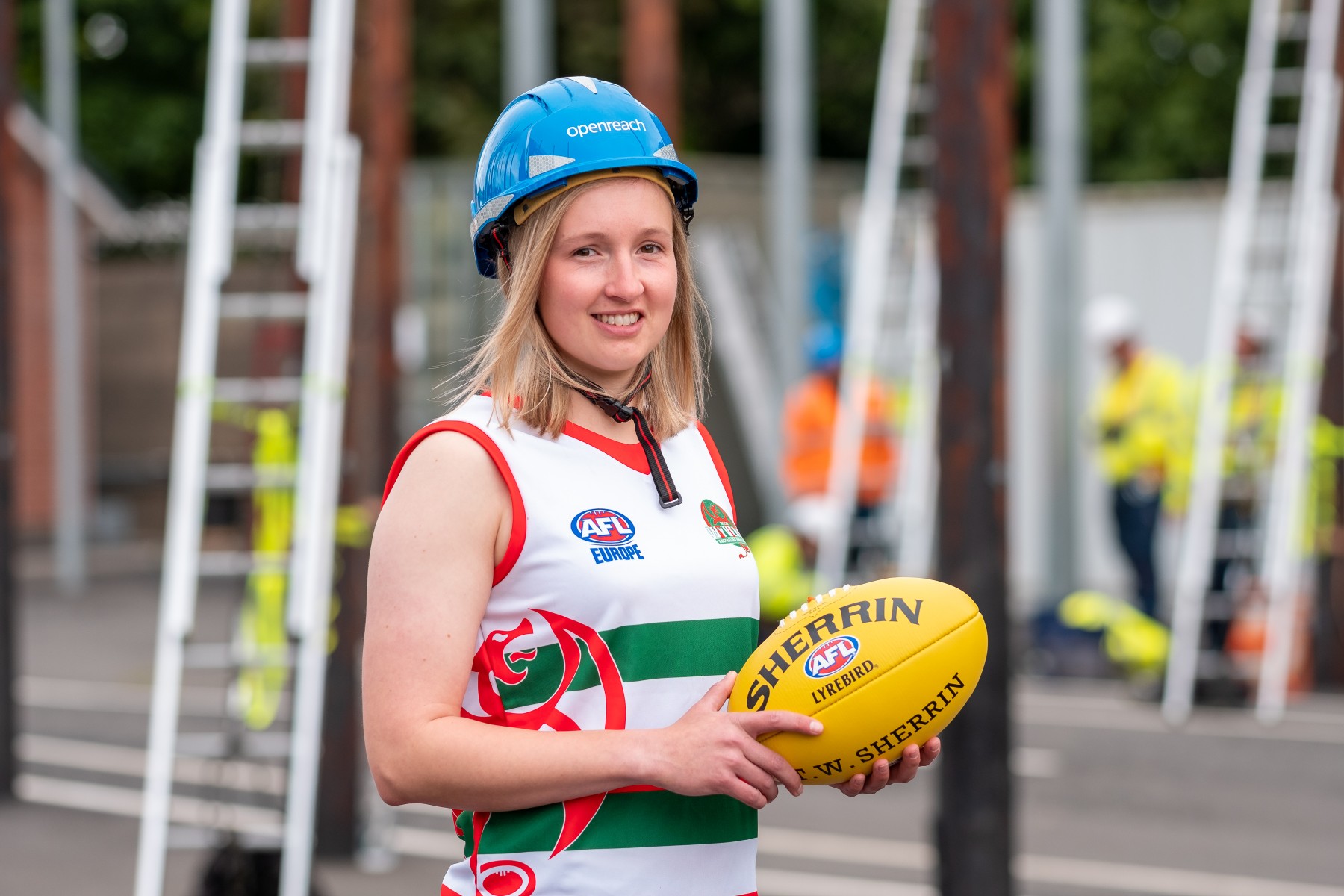