Summary
Perthshire North MSP John Swinney has been shadowing Openreach engineers to see the progress of high-speed broadband locally, including the next generation of technology. During the field visit the Deputy First Minister visited a new ‘full-fibre’ network in Innerleithen Way in Perth, where he watched a step-by-step demo of how it’s installed. 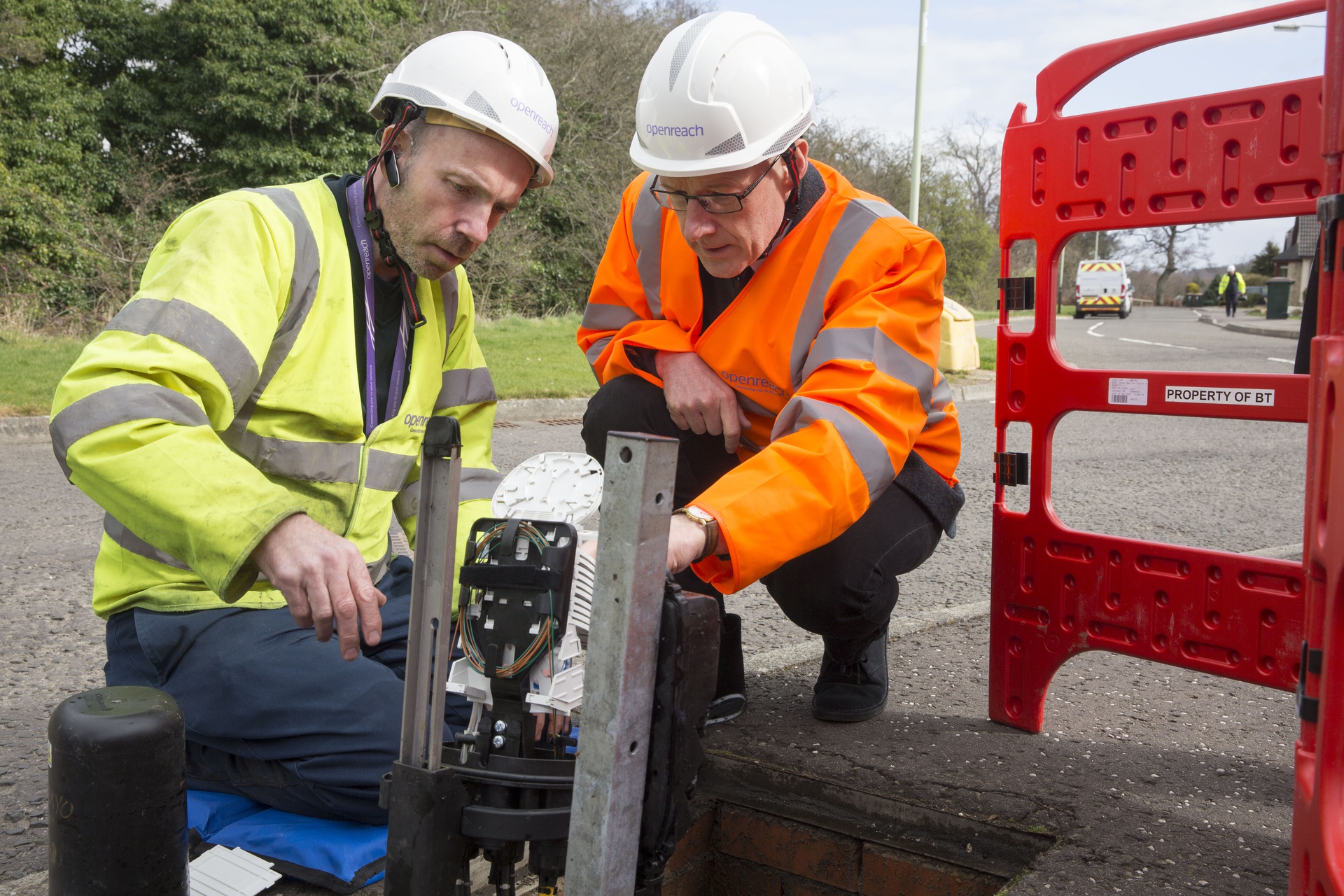 Perthshire North MSP John Swinney has been shadowing Openreach engineers to see the progress of high-speed broadband locally, including the next generation of technology.

During the field visit the Deputy First Minister visited a new ‘full-fibre’ network in Innerleithen Way in Perth, where he watched a step-by-step demo of how it’s installed. The future-proof services are capable of carrying speeds up to 1Gbps* - 21 times faster than the UK’s current average.

He also saw the inner workings of a local fibre street cabinet and heard how engineers are using innovative new techniques to bring more reliable, faster broadband to rural communities.

According to the independent website Think Broadband, 85 per cent of premises in Perth and Kinross are now able to connect to broadband at a speed of 30Mbps and above.

Mr Swinney said: “Good connectivity is absolutely vital for a strong local economy, so it’s been useful to see the progress that’s being made and hear about the next stage of upgrades.

“The Scottish Government has been working with Openreach over the last several years to improve broadband and without the Digital Scotland Superfast Broadband partnership, Perth and Kinross would have had only around 40 per cent coverage from the private sector.

“There is more work to do, and I’m determined to make sure that progress continues at pace.”

He added: “We’re at the start of a move to a full-fibre future as the old copper telecoms network gradually comes to the end of its working life. It was useful to see how engineers go about installing this new technology where the fibre runs directly to people’s homes.

“While the process is expected to take many years, it’s great to know that some local residents can already enjoy full-fibre broadband capabilities which are among the best anywhere in the UK.”

As well as its commercial investment in upgrades, Openreach has been working closely with the Scottish and UK Governments, local authorities and other partners since 2013 to bring fibre-based broadband to communities which were not included in any upgrade plans by private companies.

The Digital Scotland Superfast Broadband partnership rollout has brought fibre-to-the-cabinet (FTTC) broadband to dozens of Perth and Kinross communities and includes small deployments of fibre-to-the-premises (FTTP) in areas where it is the best technical solution.

Openreach is also working with local housebuilders to install full-fibre technology into housing developments in places like Blairgowrie, Rattray, Kenmore, Aberfeldy and Auchterarder as well as Perth.

The visit was hosted by Brendan Dick, Openreach board chair in Scotland, who said: “We know good, reliable broadband is really important to local people, and we have made great progress. However, we also appreciate that there’s more work to be done.

“John Swinney shares our ambition to make sure everybody in Scotland has access to a quality broadband service. We’re glad he was able to make time to come and learn about the challenges, technicalities and benefits of delivering digital technology in his constituency, and see an example of the next generation of broadband already live in Perth.

Openreach’s Fibre-to-the-Cabinet footprint, at speeds of up to 80Mbps*, currently passes nearly 2.6 million homes and business premises in Scotland, where take-up of superfast services across all networks stands at around 40 per cent.

Openreach is also starting to roll out FTTP more widely, with plans to reach three million homes and businesses across the UK by the end of 2020, and, if the conditions are right, to go significantly beyond.