Summary
The First Minister Nicola Sturgeon has announced 25,000 more Highlands and Islands homes and businesses than originally planned will be able to access superfast broadband through the Digital Scotland roll out. 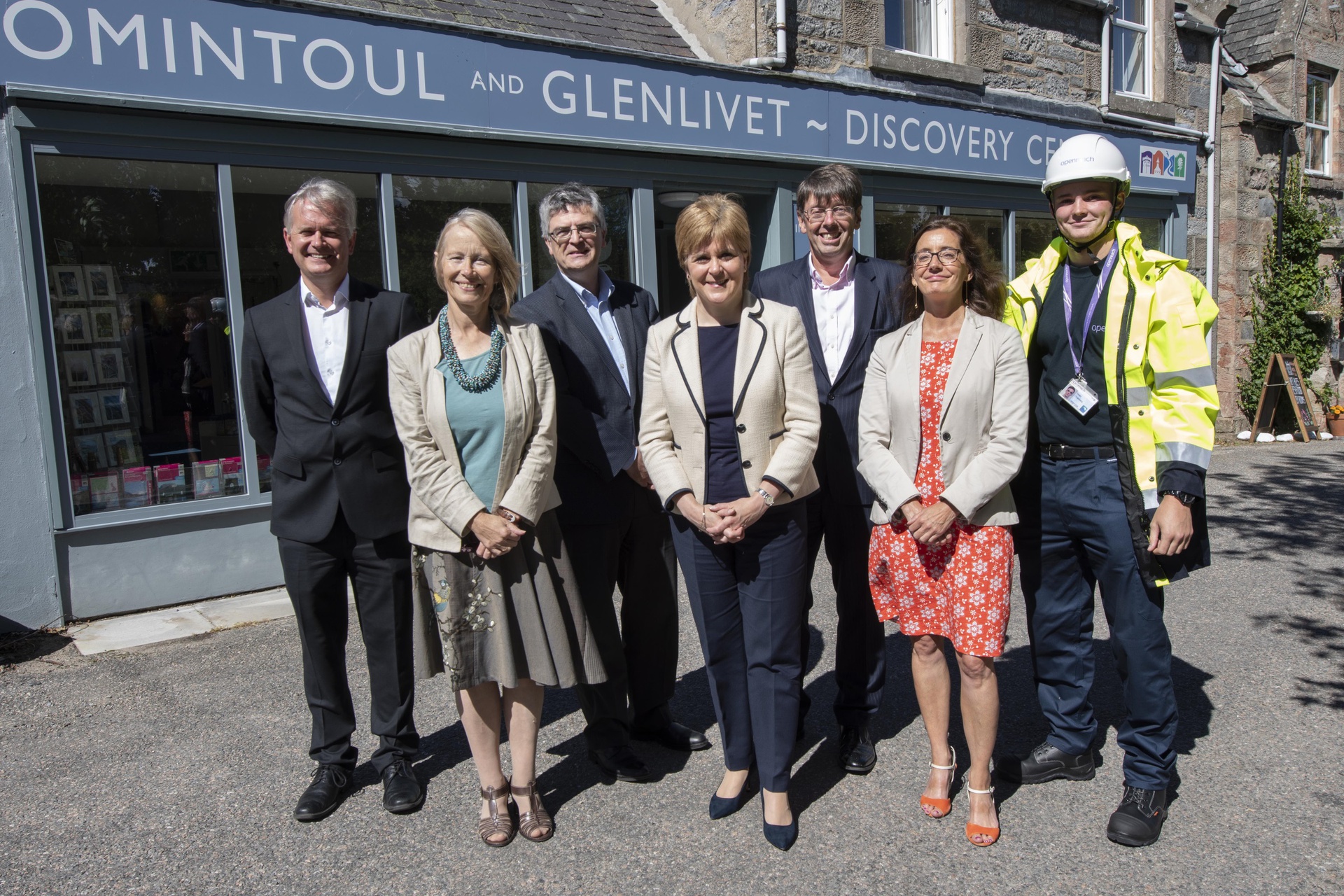 The First Minister Nicola Sturgeon has announced 25,000 more Highlands and Islands homes and businesses than originally planned will be able to access superfast broadband through the Digital Scotland roll out.

The First Minister was in the region’s highest fibre enabled village, Tomintoul, today (6 August) to see the benefits of improved connectivity and to announce a second round of extended broadband coverage.

The Tomintoul Discovery Centre, which is owned by the Tomintoul and Glenlivet Development Trust, has recently undergone a £500,000 refurbishment, and is using latest technology to bring local history to life through virtual reality and 360 degree video work.

The Digital Scotland Superfast Broadband (DSSB) project, led by Highlands and Islands Enterprise (HIE) in the region and delivered on the ground by engineers from Openreach, started roll-out in Buckie in Moray in 2014.

Having met the contract’s target to deliver access to superfast to around 124,000 homes and businesses, it is now expected to deliver superfast access to almost 150,000 premises by next year.

The Scottish Government has committed to bringing superfast broadband access to all premises by 2021, and a procurement to deliver the Reaching 100% (R100) project is currently under way.

The First Minister said: “This is excellent news for the Highlands – delivering access to superfast broadband to more than 250 Highlands and Islands communities for the first time.

“The £146 million project has passed its original targets and is providing opportunities for businesses and communities across the region to transform the way they work. The Tomintoul Discovery Centre is just one of the businesses now benefitting from superfast broadband and is an example of how they’ve used it to enhance their visitors’ experience.

“We will build on this success and our Reaching 100% programme, backed by £600 million, will deliver superfast broadband access to every home and business in Scotland by the end of 2021 – the only part of the UK to do so.”

Doug Nisbet, TGDT chair said: “Tomintoul and Glenlivet Development Trust are delighted to welcome the First Minister to our Discovery Centre and demonstrate the cutting edge technology which brings our area’s natural and cultural heritage to life.

“The Centre is testament to our community and demonstrates what can be achieved when communities work together to a common vision. Our area hosts many innovative businesses at the forefront of their field and TGDT welcomes the announcement that more properties in the Highlands will benefit from superfast broadband. We look forward to the connection of all properties in our area to the fibre network.”

When it was launched, the Highlands and Islands plan was acknowledged as one of the most challenging broadband projects in Europe. The geography, the scattered nature of the population and lack of existing or planned fibre meant it was a huge engineering challenge.

The new fibre network stretches across every local authority area in the Highlands and Islands, from North Roe in Shetland to the heights of Tomintoul and to Southend in Kintyre.

The project is funded by the Scottish Government, the UK Government, HIE and private sector partner BT Group.

“This infrastructure makes it easier for broadband and mobile operators to deliver and grow services, opening up the many social and economic benefits of good regional connectivity.”

Brendan Dick, the newly-appointed chairman of Openreach in Scotland, added: “It’s really fitting that we’re in the beautiful surrounds of Tomintoul to mark another high point in the Digital Scotland partnership.

“You only have to look at the Discovery Centre to witness the impact better broadband has on people and places across the region and the massive potential it brings for businesses, tourism and innovation.

“It’s fantastic that even more communities are now in line for a digital boost thanks to prudent partnership planning and careful execution, as well as strong take-up.”

As well as bringing fibre to some new areas, the extended build will also boost speeds for some places which haven’t yet got superfast.

Seven new exchange areas, previously not reached within the budget, are expected to see some coverage. These are:

Around 80 existing project areas across the region will see extended coverage and more local infrastructure to improve speeds. Details of locations where roll-out is ongoing as part of the project is available at www.hie.co.uk/fibre

Photographs from the event will be available later this afternoon from lesley.gallagher@hient.co.uk

Towns and villages which have seen coverage through the project include: Aviemore, Boat of Garten, Carrbridge, Grantown on Spey, Kincraig, Kingussie, Nethy Bridge, and Newtonmore.

About the Discovery Centre

The new community owned, community run Tomintoul and Glenlivet Discovery Centre was formerly owned and operated by Moray Council as the Tomintoul Museum and Visitor Centre.

The Centre is owned and managed by the Tomintoul and Glenlivet Development Trust (TGDT).

Since taking on the museum Tomintoul & Glenlivet Development Trust have extended the opening season, enhanced the retail and donations and this year completed a £500k refurbishment including the creation of first floor office accommodation and installing new technology such as a Highlands and Islands Enterprise funded Virtual Reality exhibit.

This refurbishment was funded through the Tomintoul & Glenlivet Landscape Partnership, a £3.6m Heritage Lottery Funded programme, which aims to improve heritage through restoring, conserving and enhancing natural, cultural and built heritage and Cairngorms LEADER.