Summary
Villagers in a small rural community in Inverness-shire have been blown away by the speed of ultrafast broadband thanks to cash donated by a local wind farm. 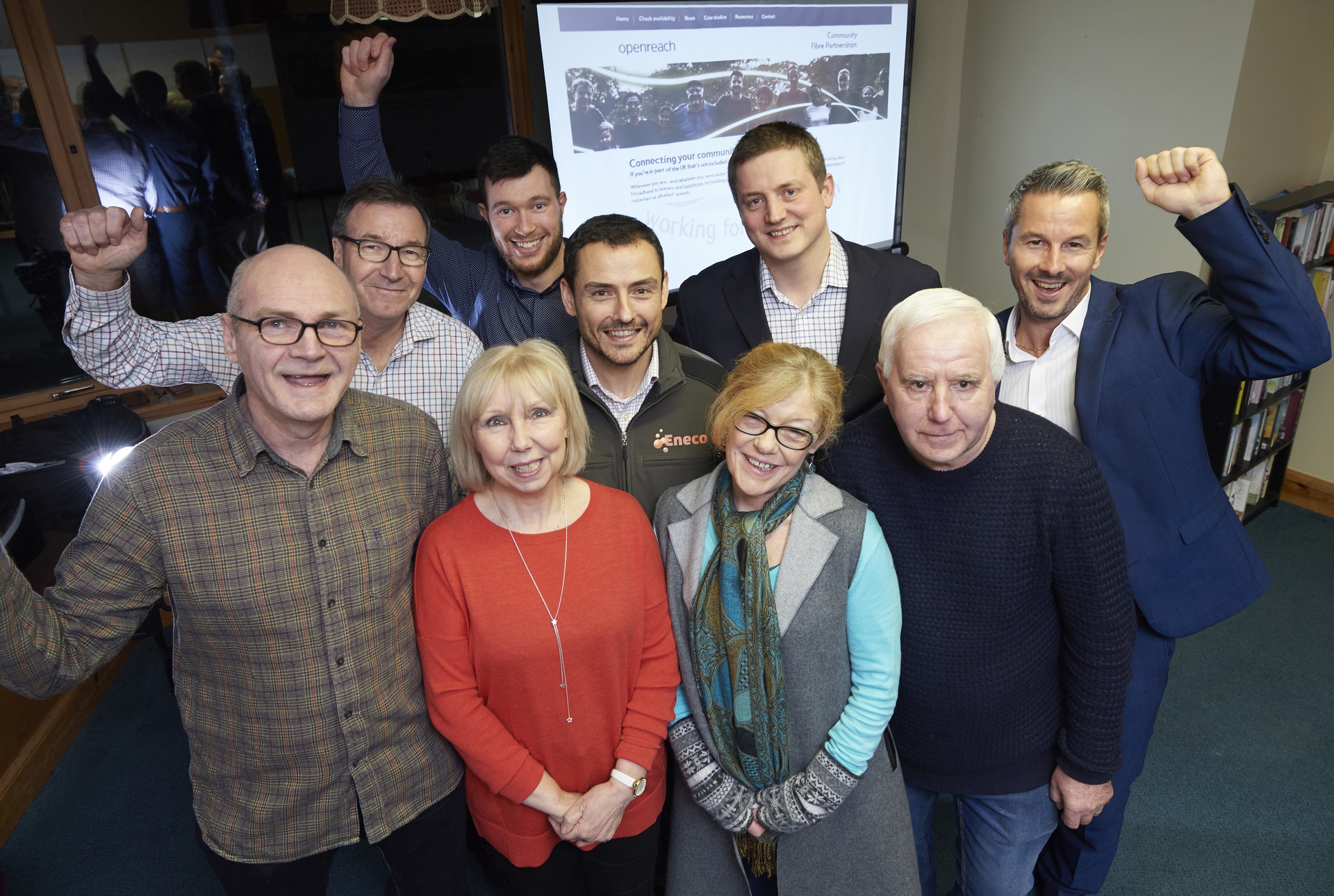 Villagers in a small rural community in Inverness-shire have been blown away by the speed of ultrafast broadband thanks to cash donated by a local wind farm.

People living in Moy, a small, scattered community around 10 miles south of Inverness, approached BT for help over a year ago because they were struggling with slow download speeds.

Residents invested money given to them for community use by the Moy windfarm operator Eneco to jointly fund a community fibre partnership with Openreach, Scotland’s digital network business. The original plan was for superfast broadband before Openreach decided the villagers would be best served by ultrafast broadband with blistering speeds speeds of up to 1Gbps – fast enough to download a two hour HD movie in twenty five seconds or a forty five minute long HD TV programme in just five seconds.

Steve Cormack a director of Strathdearn Community Developments Company (SCD) explained: “SCD is tasked with improving local living standards so we commissioned a survey which identified better broadband as a top priority with our residents. Using windfarm payments from Eneco, we contracted with Openreach to supply fibre broadband to the Moy area which had almost non-existent broadband speeds.

The result has exceeded our expectations. Every premise in Moy now has fibre to the premise and can choose from speeds up to 300 mbps. "It's like joining the motorway after being stuck in a traffic jam! The investment has revolutionised business, education and leisure in the area.

“We’re at an advanced stage of planning to do the same in Glenmazeran, another area of Strathdearn and look forward to another rewarding partnership with Openreach.”

One small business which is already benefitting directly from the fibre partnership is run by occupational psychologist Margaret Saunders from her home in Moy. Until now Margaret has had to spend a great deal of her time travelling as she was unable to work online or do video-conferencing thanks to poor broadband speeds.

She said: “Much of my work is with the Ministry of Defence through the Royal British Legion Industries, helping veterans and their families. I recently attended an MoD course in Edinburgh which then involved a great deal of online research. Previously it would have taken me about three hours to do and now I can do it in just over an hour!

“Ultrafast broadband has transformed my personal life as well as my professional life. The greatest benefit it gives me is the fun I get on video calls to my 14-month-old grandson Freddie in the south of England!”

Robert Thorburn, Openreach partnership director for Scotland, said: “It’s great that we’ve been able to work with the community to find an ultrafast broadband solution and I congratulate Steve and the residents for their hard work and determination. It shows what can be achieved when people work together towards a common goal, and we’re really proud to be part of that. A year ago the community and local businesses were really struggling with low broadband speeds and its fantastic to already start to see the transformation this partnership is bringing to everyone.

“That’s why we’re investing in hundreds of similar community projects across the UK, working in partnership with businesses, schools and communities to deliver faster speeds from a wide choice of competing service providers.”

The Community Fabre Partnership scheme is designed to help people in places not included in any current roll-out plans to bring fibre broadband to their local area, working with Openreach to co-fund the installation. If a local school benefits from the project, communities can also benefit from a BT Group grant that will cover up to 75 per cent of the cost, capped at £30,000.