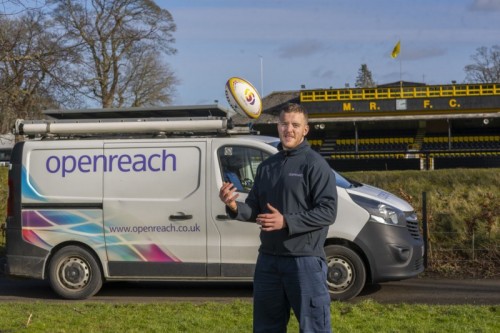 Lewis, from Peebles, was forced to retire from professional rugby on medical advice at the age of just 26, having represented Edinburgh nearly 50 times and donned the Scotland shirt against Canada and the USA in 2018.

He joins the growing team of engineers who keep people connected and install fast fibre broadband across Scotland. He’ll be working predominantly around Peebles, Hawick and Melrose and has already been contributing to the company’s response to storm response in the Borders this winter.

With 95 per cent of Scottish homes able to connect to superfast broadband, Openreach has announced plans to bring the next generation of technology - gigabit-capable full fibre - to around 350 cities, towns and villages across the nation. The new network now passes more than half a million homes and villages.

Lewis Carmichael, Openreach engineer and former Scotland rugby player, said: “The lifestyle at Openreach was a real draw for me. Having the freedom to travel round the country and take on new challenges makes every day different. Already I’ve been able to get out all across the South of Scotland and can see the material difference it makes to families and businesses to get a reliable superfast connection installed.

“Although it’s a stark change from life as a professional athlete, training and working so closely with a team all day, many aspects of the job are very familiar. When the recent storms hit it was an all-hands-on-deck approach to get people back connected.

“I knew about the opportunities at Openreach through friends but also because of the sponsorship at BT Murrayfield. I’ve completed my eight weeks’ training now but with each unique issue that arises I’m learning more. Every day’s a school day and I like that aspect of the role.”

Fraser Rowberry, Openreach’s Chief Engineer, who also started his career as an apprentice, added: “We aim to attract talented, enthusiastic hard workers from all sorts of backgrounds and former careers, and we’re really fortunate that Lewis was drawn to engineering as he considered his next steps after his pro-rugby career. He’s proving to be a real asset to the team, and we’re delighted that he now looks set for a sterling second career. He’s in good company, as we’ve also been joined by football internationalist Alana Marshall, current captain of Edinburgh’s Spartans FC, as a trainee this year.

“Openreach is a people business first and foremost, so I’m proud that we’re continuing to invest heavily in our team. It’s never too late to embark on the engineering training programme and pick up new skills that will last a lifetime.

“We’re creating and filling 500 more Scottish jobs during 2022 – including around 390 apprenticeships – as we continue to invest billions of pounds into the UK broadband network. There are posts on offer right across the country from Fife to Ayrshire, Angus to Stirling and the Highlands and Islands where new starts can relish in the same opportunities to get out and about solving practical problems and keeping people connected in their region every day.”

Lewis previously played for North Berwick and Melrose and continues to be involved in the sport as a coach at Southern Knights, a semi-professional club based at Melrose RFC home-ground of Greenyards. Anyone interested in joining Openreach can search and apply for posts at Trainee Engineer Jobs | Openreach

This short video explains what full fibre technology is and you can find out more about our Fibre First programme here. You can read more about Openreach’s 500 new Scottish jobs announcement here.

Lewis is pictured in the grounds of Melrose RFC, where he currently coaches for the semi-pro team Southern Knights.