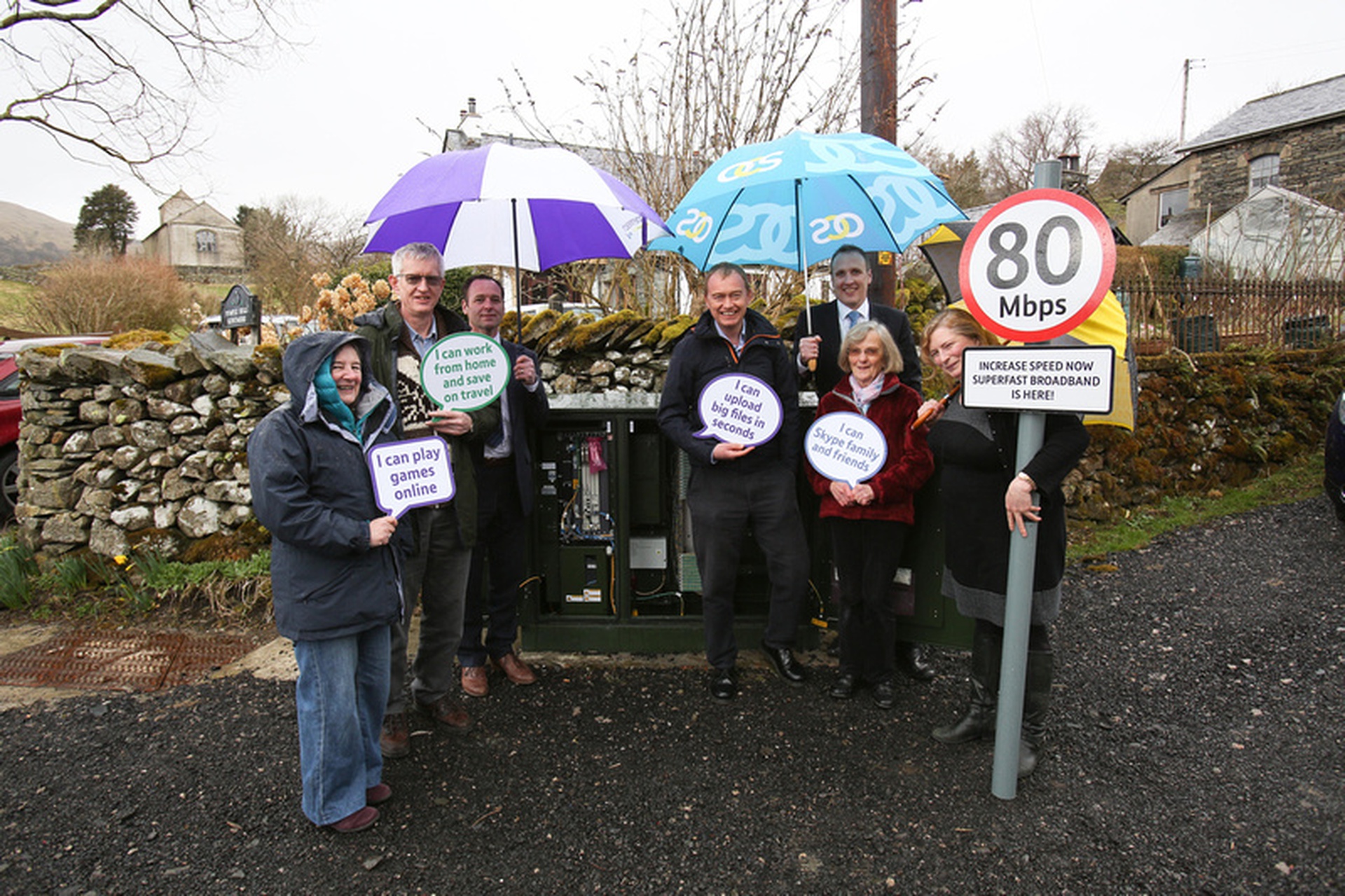 Villagers in the remote South Lakeland community of Kentmere have been brought bang up to date with the arrival of high-speed fibre broadband in their valley. Around 54 homes and businesses in the village can now get superfast speeds up to 80Mbps following investment by the Connecting Cumbria partnership between Cumbria County Council and BT. It’s a major step forward for a community which doesn’t yet have mobile phone coverage and, previously, could only get broadband capable of 2Mbps or less.

The Connecting Cumbria programme has now installed more than 700 fibre broadband structures in the county, giving more than 126,000 Cumbrian homes and businesses access to the high-speed technology.

He said: “Access to high-speed broadband is a massive issue here in the South Lakes with many small businesses finding it pretty much impossible to function without it.

“The arrival of high-speed fibre broadband here in Kentmere will be a big boost for both businesses and local people alike.”

Peter Lansberry, chair of the Kentmere parish meeting, highlighted the difference that the high-speed fibre broadband is going to make to everyone’s lives. He said: “Kentmere is a remote valley, well up in the mountains. We have no mobile phone and prior to the fibre we had broadband speeds of between one and two megabits per second …some people with less than even one megabit.

“These speeds make it nearly impossible to do online shopping and doing business is very difficult. There is no ability to watch catch-up TV or anything on the web.

“That’s changed dramatically with the arrival of the fibre connection. We now have between about 65 and 75 Mbps which is fast enough to do pretty well anything we want to do.”

Dr Jackie Bettess, who has campaigned for fibre broadband in Kentmere, said: “This is a technology for the future. I think Kentmere was suffering because we didn’t have either fast fibre broadband or a mobile phone service. Consequently, you tend to think you’re stuck in a backwater but this is very, very good for the future of Kentmere and especially businesses.”

To reach the remote community, Openreach engineers had to overcome a variety of challenges including the need to drill into the tough limestone rock to install 30 new telegraph poles.

Matthew Fishwick, senior project manager for Openreach, said: “We’ve put about 30 new poles up in the area and that was quite a difficult solution because the rock around here is so extreme and each pole needs to be drilled in. In order to ensure the minimum of inconvenience when running cables across people’s land, we’ve worked very closely with local land-owners, including the farmers in the area.

“The outcome, for the people around here in Kentmere, is just fantastic. It’s transformed the opportunities available to them.”

David Southward, Cumbria County Council’s Cabinet member responsible for economic development, added: “Connecting Cumbria is working hard to get out to more and more rural parts of Cumbria. It’s great to see us getting into places like Kentmere, which is in a long glacial valley - a dead-end - but a community that really needs superfast broadband.

“And it’s really important that we now encourage people in those communities, businesses and residents, to take-up the benefits of superfast.”

Connecting Cumbria is working hard to provide the best connectivity possible for areas not currently featured in the roll-out plans within the funding available..

Superfast Britain is a Government programme of investment in broadband and communication infrastructure across the UK. Run by the Department of Culture, Media and Sport, this investment helps businesses to grow, creates jobs and will make Britain more competitive in the global race. The portfolio is comprised of three elements:

Since October 2013, the Connecting Cumbria project – a partnership between Cumbria County Council and BT - has enabled more than 700 fibre structures, with more being switched on every day. More than 126,000 households and businesses can now access fibre as a result of the project.

The Connecting Cumbria Programme’s ambition will, by a combination of commercial investment and gap funding made available to us, enable access to Next Generation Access (NGA) broadband to 95 per cent of Cumbrian homes and businesses when added to the private sector’s commercial rollout. And Connecting Cumbria is providing two thirds of its rollout with speeds of more than 50 mbps.

There is, in addition, a commitment that all Cumbrian properties will have access to speeds of at least 2Mbps by some means. In the majority of cases this is already available or will shortly be made available via the deployment of fibre services however where properties cannot yet access this basic level of broadband services there are subsides available through the Broadband Delivery UK Better Broadband Scheme to support access to services using alternative technology – details of this scheme can be found on the Connecting Cumbria website.