Dyslexic dad-to-be is Openreach’s Engineer of the Year 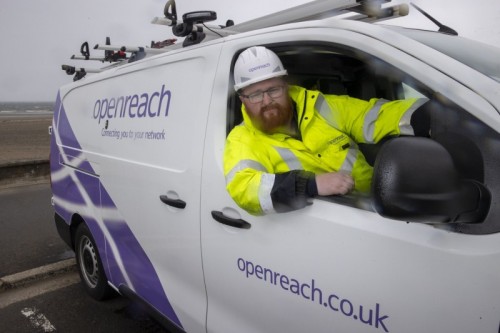 An engineer who worked around the clock to keep people connected in the wake of Storm Arwen has been named Openreach’s Engineer of the Year 2022.

Luke Picken was nominated by colleagues for his efforts to restore broadband services across South West Scotland after the devastating storm in November.

The Maybole man has now picked up his distinctive prize – a brand new van with the personalised number plate OR22 ENG.

And Luke, 29, has even more good news to celebrate as wife Emma – also an Openreach network engineer – is expecting the couple’s first baby this winter.

He said: “When the winner’s details were being revealed, I was thinking ‘surely this person they’re talking about can’t be me?’.

“I’m very humbled that the company and my colleagues thought I deserved an award of such magnitude. I don’t see what I do as special - I just come to work and do the best I can for our customers and our team.”

What makes the recognition even more special for Luke is that he has achieved it despite being dyslexic. It’s a subject the specialist fibre engineer has spoken little about in the past.

He said: “I’ve always struggled with reading and writing, especially when I was younger, and I worried it would close doors to me. I hope my story shows other people with dyslexia that it doesn’t have to hold you back - you can get on despite it and achieve great things.”

Luke’s patch manager Alastair Gilroy said: “Luke is an absolute superstar so it’s brilliant to see him singled out from a UK workforce of 37,000 for the ultimate recognition.

“He worked tirelessly to sort out dozens of broadband faults after Storm Arwen battered the west of Scotland. The damage to our fibre network was unprecedented.

“Luke tracked down every fault location then co-ordinated our response to reconnect customers, often working into the night to find and fix an issue lurking somewhere in the network. His hard work and determination inspired his colleagues to pull out all the stops.

“That’s just one of the ways he’s an exceptional engineer.”

Luke was one of 160 UK finalists in the Openreach Shining Stars Awards 2022, shortlisted from 2,600 nominees put forward by their colleagues, which saw 20 recognised in categories for Exceptional Engineers; Safety, Inclusion and Environment Champions; Unsung Heroes; and Best Boss.

Dyslexic dad-to-be is Openreach’s Engineer of the Year