Summary
The Digital Scotland team joined forces with local authorities and the Borders Railway to let people living along the rail route know that it’s full steam ahead for superfast broadband! 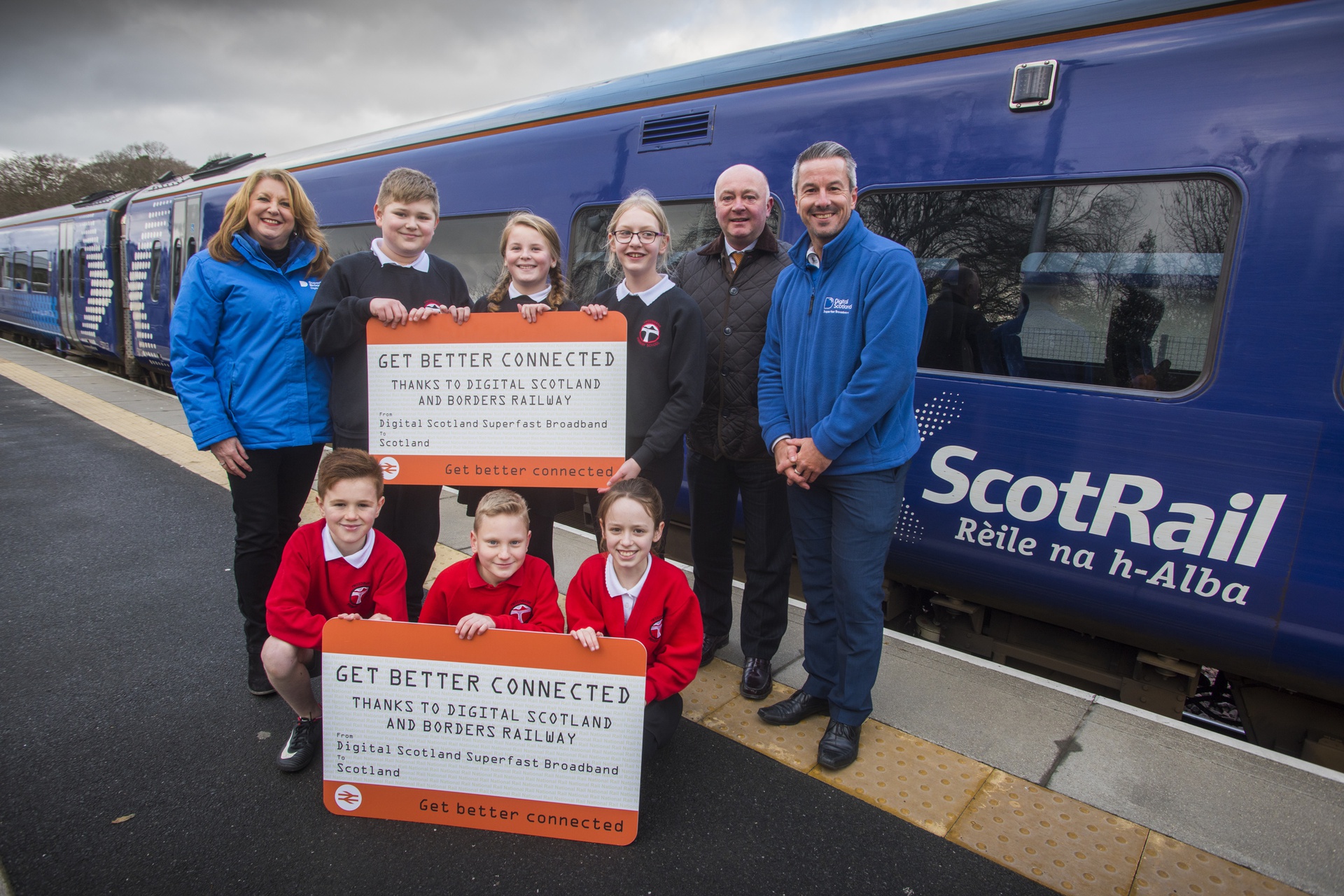 The Digital Scotland team joined forces with local authorities and the Borders Railway to let people living along the rail route know that it’s full steam ahead for superfast broadband!

The Digital Scotland team was joined at Tweedbank Station by Councillor Mark Rowley from Scottish Borders Council and senior pupils from Tweedbank Primary School to celebrate fibre availability along the Borders Railway route.

More than 31,000 homes and businesses across the Scottish Borders are among more than 850,000 across Scotland now able to connect to high-speed fibre broadband through the £428M Digital Scotland Superfast Broadband programme.

Local areas along the Borders Railway to benefit from the rollout, led by the Scottish Government, include Stow, Galashiels and Tweedbank. More local coverage across Scotland is to follow as engineers from Openreach – Scotland’s digital network business - continue work on the ground.

Local people can check the Digital Scotland website - scotlandsuperfast.com - to find out if they are able to access the latest fibre broadband technology. People need to sign up with an internet service provider, as upgrades are not automatic.

Councillor Mark Rowley, Scottish Borders Council’s Executive Member for Business and Economic Development, said: “In just over two years the Borders Railway has had a significant positive impact on the area and we are dedicated to maximising the economic impacts of the route. The availability of superfast broadband along the Borders Railway corridor is vital to businesses who may be looking to establish themselves here, or people wanting to move and utilise the railway for business and pleasure.

“The Council has contributed an additional £8.4m to extend the reach of the Digital Scotland Superfast Broadband programme which is increasingly delivering vital broadband infrastructure to more communities across the Scottish Borders.

“We do however recognise that not all Borders residents will benefit from this programme, or still face slow speeds, and we continue to work hard with a range of partners, pushing them hard to improve digital connectivity for residents and businesses across the region.”

Alyson Weir, Head Teacher at Tweedbank primary school, adds: “It was fantastic to see our pupils involved in helping to celebrate the latest fibre broadband across the Scottish Borders. It was a great opportunity for them to see the amount of hard work that’s involved in connecting up communities. It also gave them the chance to discuss how beneficial fibre broadband is when it comes to their school work and various other aspects of their home life.”

Fibre broadband offers fast and reliable connections at speeds of up to 80Mbps1 and there are many suppliers in the marketplace to choose from. Whether you own a business, work from home or want to keep in touch with friends and family, fibre broadband enables multiple users to connect to the internet at high speeds and get better, faster access to online services.

Sara Budge, Programme Director for Digital Scotland Superfast Broadband, said: “It is fantastic to see fibre broadband benefiting local residents and businesses along the length of the Borders Railway route.

“I would like to thank Councillor Mark Rowley and senior pupils from Tweedbank Primary School for joining us to celebrate that fact that, together with Borders Railway, we are making Scotland more connected.”

BT Group is investing £126 million in the rollout, and the total project value includes around £18 million which is being reinvested back in to the programme during 2018 as a result of stronger than expected early take-up.

Robert Thorburn, Openreach fibre partnership director for Scotland, said: “Thousands of people and businesses across the Scottish Borders now have the opportunity to access their best-ever broadband speeds when they sign up with a service provider.

“Industry regulator Ofcom has highlighted that many consumers could be accessing significantly faster speeds by upgrading2, and I‘d urge local people to check if they’re able to order the high-speed services that are now widely available across Scotland

“With work continuing into 2018, we’re right on track to deliver.”