Coll of the wild as stowaway cat takes ferry to island 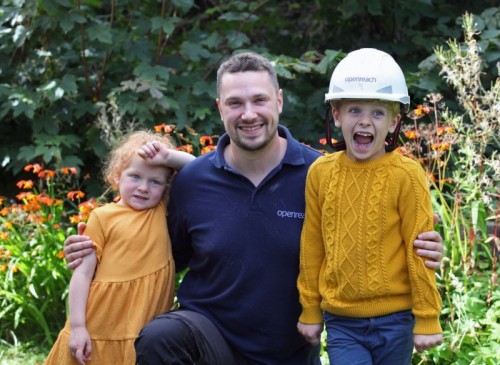 An Openreach engineer had an unexpected passenger on a 100-mile trip to Coll to fix a broadband connection for the island’s fire station.

Tia the cat sneaked into Doug Craig’s van as he loaded up in Oban, Argyll & Bute, at 4am, and hid in the back for the three-hour ferry crossing to Arinagour in the Inner Hebrides.

It was only several hours later, after Doug (31) had fixed a fault in the station’s broadband wiring, when he spotted his uninvited feline guest.

Openreach engineer Doug said: “It was a last minute trip due to an urgent data fault at the voluntary fire station on Coll. I was working for a few hours before I realised Tia was there.

“I’d noticed my tool bag was all hairy and thought it was really odd. I got the fright of my life when I saw two eyes shining out from the back of the van.

“At first I thought a Coll cat had sneaked in but then I got a closer look and recognised her from home. I thought ‘Oh no, I’ve cat-napped my neighbours’ pet!’

“I’ve heard of other curious cats climbing into colleagues’ vans on occasion – but I’ve never heard of one that went to sea on a 100-mile round trip.”

Doug got a message to his mum back in Oban to let his neighbours Elyse and Martin Hamilton know where Tia was, so they and kids Stanley (7) and Beatrix (5) wouldn’t worry. He then dashed to the island’s general store to stock up on tuna and biscuits before it shut for the afternoon.

While Doug slept in a tent under the stars for the night, Tia bedded down in the back of the van. The next ferry wasn’t until the next day, when she was reunited with her owners.

Home Economics teacher Elyse said: “Tia can be quite shy and independent and it wasn’t until Doug's mum knocked on the door we actually realised she was missing.

“She’s snuck off for wee excursions in others cars before – and even gone to work with Martin – but taking a holiday to Coll is wildly adventurous, even for her!

“Thankfully she was too timid to come out of the van and go exploring. Needless to say we were delighted to get her back safe and sound.

“We’re beyond grateful to Doug for taking such good care of her – as I was trying to fathom how we would manage a trip to Coll to bring her home.

“We’re hoping she’s had quite enough adventures for a while, although she seems to have really warmed up to Doug and we could see her trying it again to get spoiled!”

Doug, a former postie who joined digital network provider Openreach as an apprentice, keeps people connected across a rural patch that also includes the Inner Hebridean islands of Tiree, Mull and Colonsay.

Cat & Doug – the travellers were reunited in Oban after their adventure, and Doug with Tia’s humans Stanley, aged seven, and Beatrix, aged five.

Coll of the wild as stowaway cat takes ferry to island