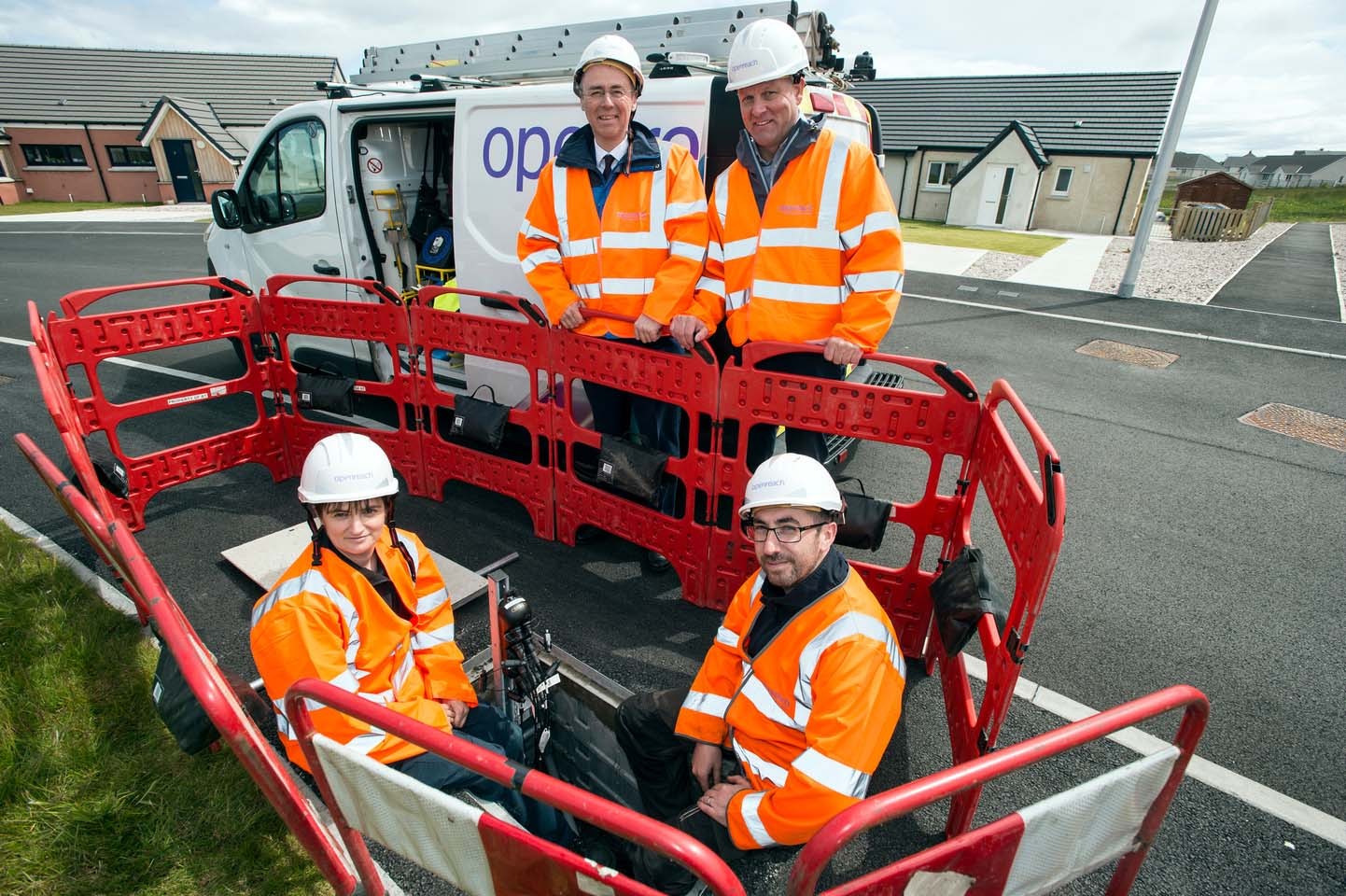 He saw a ‘full fibre’ network being built directly into the new properties at Mackenzie Avenue, Parkend, to deliver ultrafast internet connections. The future-proof, reliable services can carry speeds up to 1Gbps1 – around 18.5 times faster than the UK’s current average, which recently topped 54Mbps according to Ofcom. Alasdair Allan also got an update on superfast services locally as he looked inside a Stornoway fibre street cabinet2. According to the independent website Think Broadband, 77 per cent of premises in the Western Isles are now able to connect to broadband at a speed of 24Mbps and above since the rollout of superfast broadband began in the islands in 2015.

Most local services currently make use of street cabinets (known as Fibre-to-the-Cabinet or FTTC) while ultrafast full fibre (Fibre-to-the-Premises or FTTP) goes directly to peoples’ homes.

Alasdair Allan said: “Everyone wants good broadband, so spending time with engineers to hear about how we’re doing locally and what’s coming next was useful.

“The Scottish Government and Highlands and Islands Enterprise have been working with Openreach over the last few years to extend broadband, starting from scratch in Na h-Eileanan an Iar where there were no existing plans for any upgrades and no core fibre routes from the mainland.

“That has changed quite dramatically but, with around three in 10 households still not able to connect to a superfast speed, we need to make sure progress continues apace.”

He added: “The next evolution of the network will be to full fibre, with fast, reliable broadband piped directly to peoples’ homes. Scotland is just at the start of this journey, so it’s good to see the latest technology being built at an early stage in Parkend, future-proofing local, new homes.

“I welcome Openreach’s commitment to building more full fibre for Scotland in the months and years ahead, working with builders and others.”

Openreach has been working closely with the Scottish and UK Governments, HIE, local authorities and other partners since 2013 to bring fibre-based broadband to communities which were not included in any upgrade plans by private companies.

The Digital Scotland Superfast Broadband partnership rollout has reached more than 13,700 Western Isles households and businesses, with most able to access FTTC broadband and small deployments of FTTP in areas where it’s the best technical solution.

Fraser Rowberry, Openreach service delivery director for Scotland, said: “We know good, reliable broadband is really important to local people. Factors like geography and population dispersal make the Western Isles one of the most challenging places in the whole of the UK to build fibre. While progress is significant, there’s plenty more to do.

“We welcomed the opportunity to show Alasdair Allan MSP our local network and see an example of the next generation of broadband already live in Parkend. Our engineers are working hard every day to keep local communities, businesses and vital public services connected.”

1 These are wholesale speeds available from Openreach to all service providers; speeds offered by service providers may vary. FTTP is capable of delivering the fastest residential broadband speeds in the UK – up to 1Gbps – fast enough to download a two hour HD movie in 25 seconds or a 45-minute HD TV programme in just five seconds.