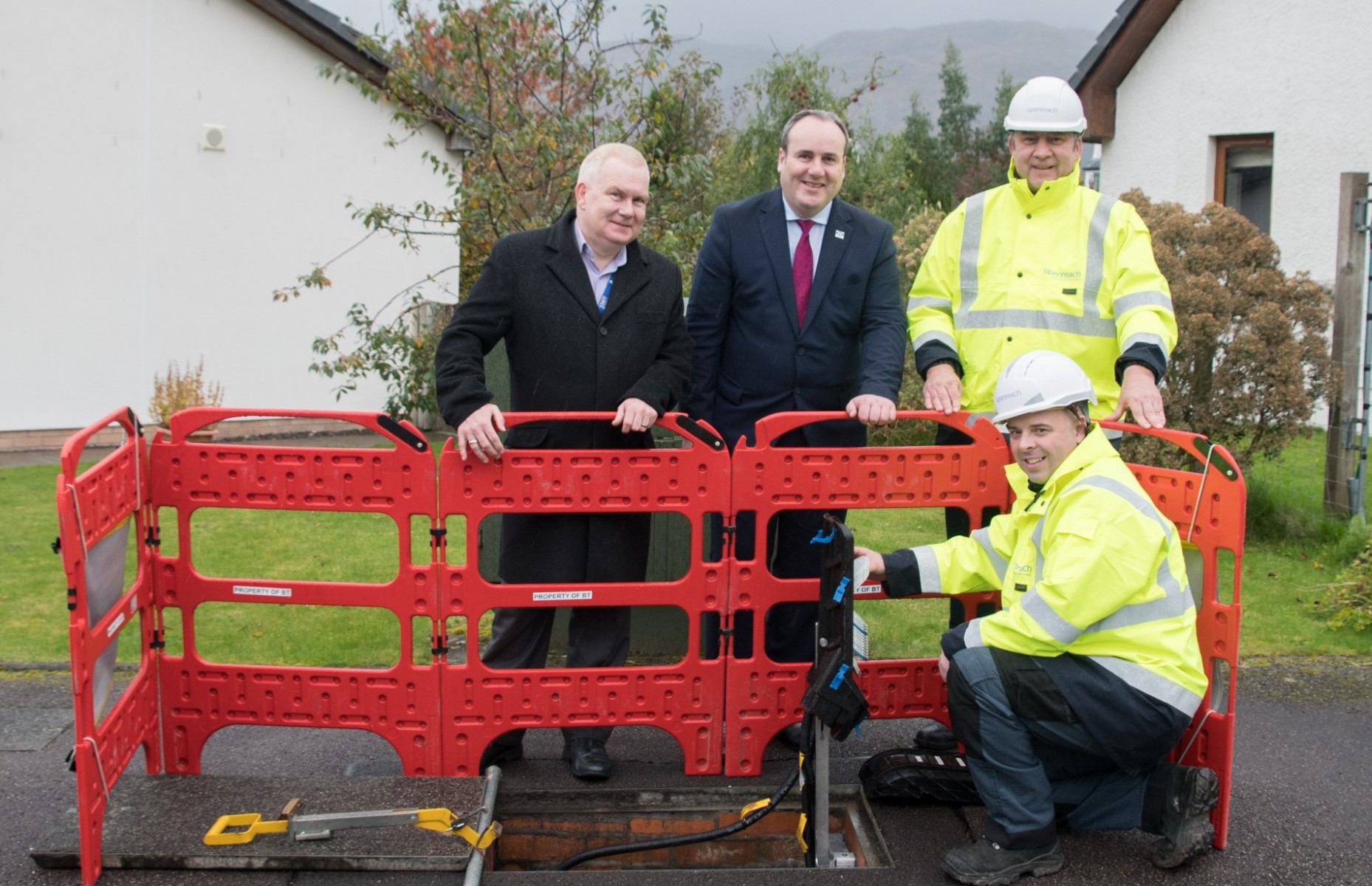 Extra funding of almost £3 million is to be invested in broadband for the Highlands and Islands after take-up rates across the region’s Digital Scotland fibre network topped 60 per cent.

Hundreds of additional homes in some of Scotland’s most rural areas will be able to access ‘full’ fibre direct to their homes (also known as Fibre-to-the-Premises or FTTP) through the funding boost.

The roll-out, led in the region by Highlands and Islands Enterprise (HIE), will continue until 2020 and in all the project will reach 30,000 more premises than the initial contract target. A fibre network now stretches from North Roe in Shetland to Southend in Campbeltown, bringing fibre-based services to around 300 communities across the region.

Openreach is accelerating the return of additional funding under the contract1 as a result of the high level of take-up by households and businesses.

Minister for Energy, Connectivity and the Islands Paul Wheelhouse announced the new funding during a visit to Taynuilt, to see how the latest fibre technology is being used to reach homes in the region.

Mr Wheelhouse said: “Connectivity in the Highlands and Islands has been transformed by the Digital Scotland programme. The region as a whole has seen a huge swing in availability of faster fibre-based services, from 4% of homes at the start of the project to around 85% today.

“Grimsay and Great Bernera in the Outer Hebrides recently became our first fully ultrafast capable islands. We’re now set to see similar coverage in other areas that have been challenging to reach, including Waternish and Glendale in Skye. I’m delighted that as a result of great take-up of services in the region even more people across the area will benefit from the full fibre network.”

In 2015, £2.23m was invested back into the programme thanks to a similar contract hand back. To date, the £146m partnership project has created a new core network, and provided fibre access to more than 180,000 premises using both fibre to the cabinet, FTTC and FTTP technology.

Stuart Robertson, director of digital at HIE, said: “We’re delighted to have more funds to reach that little bit further. We placed our final project cabinet in Wester Ross last week, it will mean more coverage for the Dornie community. All of our remaining coverage now will be FTTP. It allows us to bring high speed services direct to the people in more scattered homes and not spots, who may currently face the poorest broadband speeds.”

Bruce McClory, Openreach’s service delivery manager for Argyll and Bute, said: “It’s fantastic news that six in 10 of the local households now passed by the Digital Scotland network have migrated to better broadband - and even more people could benefit.

“The extra funding, which we’re returning early, will put hundreds more of the region’s hardest-to-reach households at the forefront of the UK’s shift to a full fibre network.

“Full fibre provides more reliable, resilient and future-proof connectivity - and it’s fast enough to download an HD film in less time than it takes to make a cup of tea.

“Good connectivity breathes new life and opportunities into remote communities - and we look forward to connecting even more of them.”

The DSSB project in the Highlands and Islands is funded by a partnership of the Scottish Government, HIE, Broadband Delivery UK (BDUK) and BT. It is delivered on the ground by Openreach.

Customers can check availability of fibre broadband at www.hie.co.uk/fibre

1 Under the terms of the Digital Scotland contracts, a share of monies generated through demand (Gainshare) is repayable over the 10-year length of the contract to the Scottish Government and HIE. Openreach has chosen to return these funds earlier than planned.

2 These are wholesale speeds available from Openreach to all service providers; speeds offered by service providers may vary. FTTP is capable of delivering the fastest residential broadband speeds in the UK - up to 1Gbps - fast enough to download a two-hour HD movie in 25 seconds or a 45-minute HD TV programme in just five seconds.